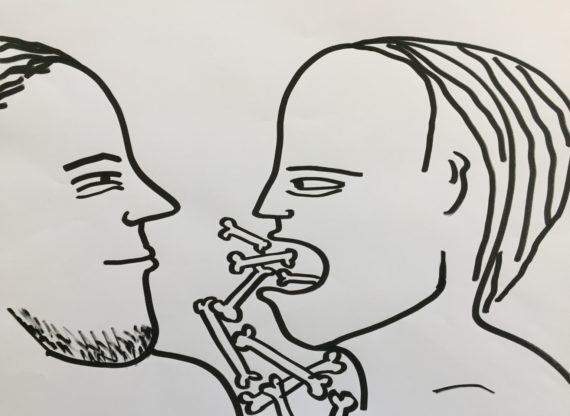 I have been having an (episodic) conversation about artist Nina Edge’s work for over thirteen years, commencing with a commissioned essay for Independents Liverpool Biennale in 2006 on her ‘Nothing is Private’ installation at her home at 40 Kelvin Grove in Toxteth, Liverpool and brought up to date on a very wet summer day in Liverpool in 2019 with her drawing project ‘Ritual Bombardment in the Charnel House of Power’, made as part of Unity Theatre’s Light-night ‘Ritual of Voting’ programme. I have to say I like Edge’s work because I like her politics, and I have enjoyed and continue to enjoy the continuity of her attention, respect for social justice and community, care and scale of thought and reach she brings to her projects, work and manner.  Enmeshing craft and hand-made sensibilities with contemporary print technologies and forms of protest and display, her work appears on advertising hoardings, postcards, textiles, net curtains and sculptures made from keys and money  – her projects are a series of interconnected radical acts that bring the practices of life and its politics closer to the practices of art. Like me she is actively anti-austerity; that fiction-based narrative from the right-wing, which was designed to cut out an entire generation and class from access to resources, platforms, a right to speak, be heard, to be visible and be represented – a cessation of debate.  While it has to be noted austerity and its methods have generated specific and long term hardships for women.1 And now we have Brexit.

‘Ritual Bombardment In The Charnel House of Power’ made up of a series of stark pen drawings on aging cartridge paper looks to social media, online platforms and digital technologies , often authored by anonymous agencies and actors, as an implements of influence, social or political manipulation and targeted opinion-making. Across a series of theatrical, illustrative vignettes Edge catalogues the archetypes, codes and characteristics of online behaviours. Thoughts of as ‘dramatic fictions’ and installed in a long vestibule outside of a theatre space these works on paper, which clustered together appear like a filmic storyboard or animation, describe personal interactions with social media through its increasingly negative, desperate and addictive agency.  Here in pared-down simple drawn gestures are the ‘Poisoners’, the ‘Harmers’, the ‘Inflamers’, the ‘Blamers’, ‘Dripfeeders’ and ‘Onlookers’ in a cast of the technologically down-beaten and weary.  What she connects in these drawings in the fantasy of online platforms and the real-world situations it engulfs.  What Edge is drawing upon here is anger, desperation, fear and tension, distributed within mobile screens, waiting at the surface, one swipe away.

I like to think of these works connected to histories of political cartoons, lampooning, satire, parody and social commentary from William Hogarth and James Gillray through to Steve Bell and Martin Rowson but alongside these journalistic narratives are references to contemporary art and experimental animation. To my mind I see aspects of the works of David Shrigley here, of Czech stop-frame animation pioneer Jan Švankmajer, especially his work ‘Dimensions of Dialogue’ from 1982, and to artists like Raymond Pettibon, Paul Noble and Susan Hiller, specifically in her work on extreme violence inhabiting the world of Punch and Judy in her seminal multi-screen work ‘An Entertainment’ from 1990.

Best of all in Edge’s suite of often times quite brutal bodily-aware, emotionally-aware drawings are a grouping of white-on-white renderings that at first give the impression of being drawn with invisible ink. This set of work illuminate what Edge’s practice often excels at: the smallest details in larger, broader expressions inviting closer, intimate inspection – literally drawing us closer to her world. These white drawings, almost impossible to document and photograph, requesting your presence, while eschewing forms of social media interaction, represent things we cannot see, specifically the tactics of the ‘invisible’ political or social influencers.

Several months ago for the online journal This is Tomorrow I wrote about Phil Collins’ video work ‘Ceremony,’ (2018) 2  a ’journalistic video essay structured as a complex melding of transnational road movie, rumination on the (in)visibility of public monuments, archival political portrait and ideological time and image machine.’ And in that text I drew upon academic Dr Andrea Philips’s initiative  How to Work Together (2014) 3,  which looks at how individual and institutions operate, especially in increasingly neo-liberal austerity-led scenarios and economies, alongside the creeping privatization of arts funding, the toxic Murdoch-backed Freelands Foundation for example, demonstrates  or expresses their politics. To my mind what then connect Collins and Edge is this desire to cut through the ‘charade’ of contemporary politics, culture, economics and hold agencies and actors of power, tech-companies, governments, politicians, curators, economists whatever,  to account for their  actions, holding a light up to these political expressions and in turn for individuals to understand and draw attention to how we have become willing participants in these manipulative games.