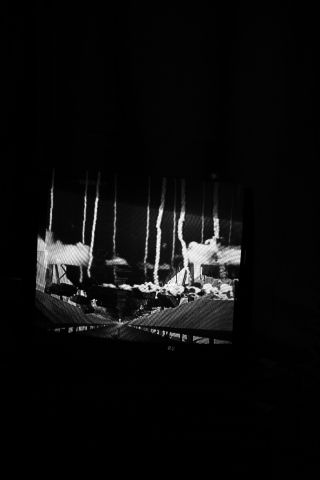 It is now nine years since Robert Casselton Clark’s epic tour de force installation ‘plans for the real world’ at the Henry Moore studios at Dean Clough, Halifax. Since then he has focused his energy on exhibiting internationally with key shows in Portugal, Belgium and New York. Here in the UK we have had to wait patiently for our next fix of his unique brand of sensual, evocative and complex imagery. Finally, it has arrived.

On walking into the space I was reminded immediately of Clark’s sublime governing aesthetic sensibilities, where placement is always of a particular concern. Circumnavigating the walls about a hundred black and white photographically printed images run horizontally around the chamber, suggestive of an oversized analogue film strip. At first glance this encodes the potential of a sequentially linear narrative, but Clark rightly eschews this obvious route. Instead he offers up a fragmented and temporal structure, where images act like obliquely teasing vignettes capturing fleeting aspects of passing moments, offering glimpses, but never the whole.

Surrounded by a field of deep rich black, images appear like angled screen shots of a cinema projection, or like approximations of photographic negatives, exposed by a darkroom enlarger. A forensic trace is laid and viewing becomes a game of anticipation and speculation. This strategy of ambiguity is core to the success of the work. There are glimpses of woody enclaves, and landscapes which hover in association between waterside reflections or fog enshrouded places. There is an aerial crowd scene of sunbathers, laying on a beach which at first glance has rather more ghastly connotations. An image of a white trouser leg with a bare foot, seems like a flickering candle against the black background. A shadowing figure shape ascends a staircase.

The exact origin of most of the images is not evident, and the ‘establishment shot’ is never used. Holistically they create a sense of time past, of a deep unfathomable longing and of an intriguingly enriching melancholy. Individually each picture stands as a resolved work, but resists simplistic interpretation. As pictures they whisper to, rather than shout at the viewer. But when you string them together, the lyrical and poetic depth of the project gathers to a symphonic gusto.

As a viewer I am reminded of being on a train passing through the suburbs on dark winters night. Like that experience, one gets glances and views into many worlds and places you will probably never know. It leaves you with what I can only describe as a comforting kind of emptiness, one that is deeply nourishing and one which lingers long in your pysche.

THAT FARAWAY LOOK is not a neatly packaged or signposted product, unlike much of the art currently circulating, but is a far more complex, sensual and sophisticated affair, and like all the better things life has to offer, is not easily translated into a simplistic form, for the ease of lazy consumption.

I left the Lanchester stimulated, challenged, poetically moved and hungry for the next show by Casselton Clark, hopefully the wait next time, will not quite be for so long.