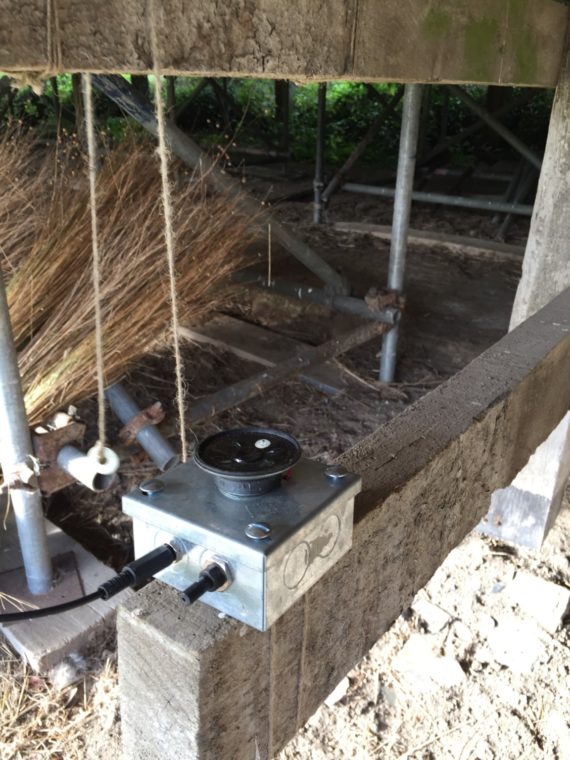 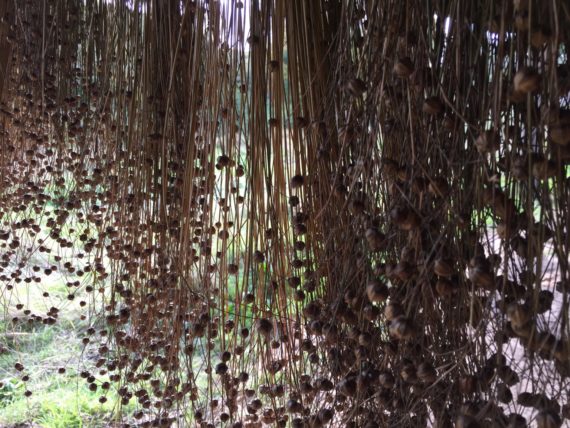 On this late October day, sitting outside in what we might, I suppose, now call the ‘garden’, I’m less disorientated than on my previous visit to the Twineworks and the village of West Coker in Somerset.

‘Ropewalkers’ brings together new work by Jo Ball, Andy Parker and Simon Whetham on two sites: at Dawe’s Twineworks Museum and just a little further into the village, at the OSR Project Space. I go against my usual practice and make the mistake of reading the artists’ statements before exploring the work –– a mistake only in the sense that I never wish to be predisposed in any way before I experience an artwork, for better for worse. I’m oddly privileged sitting here, all alone. This is after all a public place, and yet I have carte blanche to spend as much time here as I like, unhindered by others’ muttered conversations or distracted by any running commentaries. Unhindered, too, by seeing how others respond to the work.

Being here alone only serves to make me more aware of the ghosts in this place. During its lifetime as a working factory was it ever as loved and cherished as it is now? I feel the extraordinary passion of the volunteers who keep this rather forlorn site alive, in the very fabric around me. It can be hard for art to compete in circumstances like these. This relic is thought to be the last rural twineworks remaining in England with all its machinery, a last vestige of what was the most important industry in this part of Somerset for more than 500 years.

I’m glad I’ve started here rather than in the formality of the gallery space. Simon Whetham’s piece is spread across the site, hidden but not, easy to find if you look, but easy to overlook if you don’t. In this sense, it is the most embedded of these three pieces, literally part of the fabric. I pick up a pair of headphones from the rack and find the first portal, I plug in the headphones and am immediately lost in a soundworld the belongs entirely to this place, extends it, tells its stories, abstracts it yet somehow makes it more concrete. As I wander along the length of the very long building (designed for unbroken lengths of twine-in-the-making) I see a little speaker and a galvanised washer hanging on a piece of sisal clearly encouraging me to play. A contact microphone picks up the sound of metal against metal and gently amplifies it as I play with the nails that once held and separated lengths of twine, playing a tune with the washer. There is an almost unbearable charm about this that

feels utterly compelling. I find one or two more of these and, on this late October day, I could sit here for hours revelling in this simple new instrument.

I realise I am surrounded by Jo Ball’s work, which is the most subtle presence within the exhibition. Beautiful hand-baled sheafs of flax hang drying here. A gardener, Jo’s original intention was to grow flax with a view to revisiting the making of traditional linen, but instead created a far-reaching community growing project. She became obsessed with the growing of the flax itself, inviting people across the world to grow flax from seed as a remembrance for a plant that has almost become lost and mourning the loss of a once- pervasive cottage industry. I’m moved by this – primarily because of its understatement, its gentle presence within the space – just clumps of hand- pulled flax hanging upside down to dry.

Speaking earlier with Simon Lee Dicker, the artist behind OSR Projects and the curator of this exhibition, I learnt of his enthusiasm for Andy Parker’s work and his high expectations for this project. But for me it feels too forced, too complex in its narrative, too artfully expressed, too abstracted. This is odd, because Andy has clearly been drawn to the history of this place and has drawn on the story of one particular character and woven a new narrative in attempting to draw contemporary presences. Here at the Twineworks the presence is minimal, a lit outlining of the word ‘success’ mounted on the roof of the building. It’s daylight of course, so the word sits there inertly, looking puzzling rather than successful. I’m hoping that the second part of the work, in the more formal surroundings of the exhibition space down the road will enlighten me.

On the way there I walk through the churchyard and am rather enchanted by the presence of some of Jo’s flax in the porch of the church where Harvest Festival has recently been celebrated. This above all evidences Jo’s reach into the community with this project.

Entering the OSR space itself is always a special moment. This former school remains unaltered on the outside, and it’s always a surprise to walk through the oak door into a clean, white gallery space. Most dominant within the space – immediately so – is Simon’s soundscore, playing on vinyl in the middle of

the space. Here the work feels much more like the composed soundscore that it is, but loses something in its removal from the context of the Twineworks.

Another collection of drying flax lies in one corner of the room: I’m drawn to kneel and look at the twine binding the sheaf together and see a hand- stamped metal token proclaiming it to be ‘Coker Flax’, and on the other side, belonging to ‘Jo Ball’. I realise with a momentary sadness that I’ve seen nowhere within the exhibition the contribution of all those who became involved in the project – in this iteration of the piece, the community is missing, which seems a shame. On the wall is a series of what appear to be reproductions from ‘The Annals of West Coker’ recording crop rotations, names of field, and more – an agricultural record. It’s only after a while that I realise this is no mere photocopy but a meticulously hand-drawn artefact that may or may not be entirely fictitious. It’s luscious.

Andy Parker’s work is its own fiction and is by far the most visually dominant within the space. Andy is attempting a contemporary re-telling of the story of William Dampler, Naval hydrographer, explorer and pirate – the very model of a Jacobean privateer. It’s a re-telling that displays near-contemporary found objects as if they were a treasure horde, and photographs of the artist dressed as Dempster roaming the local shops, as if marooned here awaiting the repair of his ship. But I find it forced and uncomfortable. It leaves me untouched, a re-telling of a story I’m not sure I quite understand –– or want to.