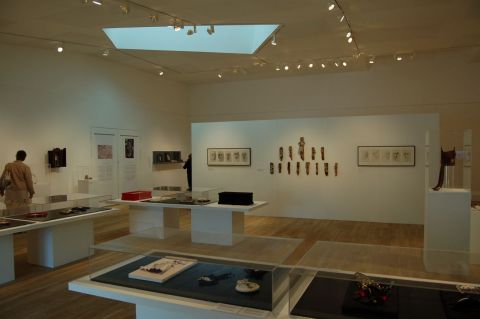 "Though she works predominantly in textiles and embroidery, there is nothing soft about the work of Rozanne Hawksley, displayed in a major solo exhibition running at the Ruthin Craft Centre from April 4, 2009. Her extraordinary art covers the great themes of life – love and loss, war and suffering, isolation and the abuse of power by focusing in on intimate details of what they mean to a specific individual. As the book by Mary Schoeser issued to accompany the exhibition details, this is an artist of major significance whose story is all the more remarkable for her only coming to national prominence twenty years ago when she was already in her fifties.

Her installations combine poignant materials – a faded glove, a lily, a photograph or fragment of chiffon to make a powerful, reflective point. The ribbon from a sailor’s cap and trim from his jacket lie part-finished among a sewing kit. A faded khaki heart is pierced by a tri-corn of spent bullet casings. One of her most famous works, ‘Pale Armistice’ in the collection of the Imperial War Museum, a funeral wreath of white gloves with bleached bones nestled among artificial flowers, has become totemic of the death toll of the First World War."

Ruthin Craft Centre, which will find out this week whether or not it has reached the shortlist for the most valuable prize in the the artworld, the Art Fund Prize, is a regional gallery showing exhibitions of international significance. This exhibition, the first major show of Rozanne Hawksley's work, is the sort of show you might expect to find in the V&A.

The recently opened new galleries have been transformed into a completely different space and it feels as though the Gallery has found it's feet in terms of utilising what has become a major exhibition venue, showcasing three different shows in the different galleries, as well as hosting artist residencies, temporary exhibitions, artist/maker studios, and video screenings.

The main exhibition comprises of a series of intimate objects. These objects highlight the hugely creative mind of Rozanne Hawksley. A self effacing artist she quietly gets on with the act of making things, exploring the major things in life, finding herself and where she belongs in the wider world through her highly personal pieces.

In the video made to accompany this exhibition, she talks candidly about someone who sent her a squashed frog through the letterbox. She later admits to having used the jaw in something!

The work on show draws on the pain and suffering felt by us all at times in our lives, but she is specifically known for her work in response to acts of remembrance, such as the wreath of white gloves in the the Imperial War Museum Collection, the partner piece is displayed here. This was the piece that brought the artist much attention nearly 20 years ago, it references poppy wreathes, but at the same time represents peace, the white gloves feeling like skin, wings of doves.

Sometimes the work seems so private, such as memorials to the artist's son and husband. It is painful to look at but at the same time empathic. There is something of the torture of Francis Bacon being enacted but here the work is domestic in scale, if not in power. We enter private memento mori and public shared loss, as in the tied pieces of fabric upon which the public were invited to write comments at a show on HMS Belfast and in Plymouth. In this context that work takes on a beautiful simplicity, personal remembrances shared to form collective memento.

There is something of the relic to the artists work, beautiful bird skulls are treated like the precious objects they are, redefining themselves through the use of thread and pins.

I would highly recommend a visit to Ruthin to see this show, and to buy the excellent catalogue written by Mary Schoeser.

The other exhibitions currently on show are Welsh tableware and contemporary crafts for the interior.