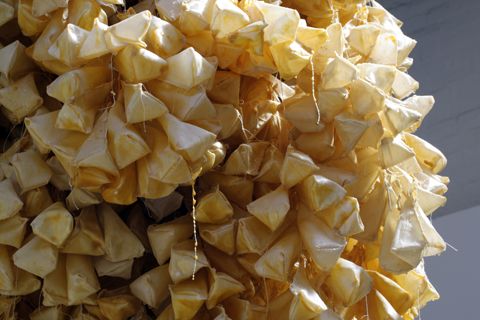 Featuring the work of fifty eight graduates from Scotland’s Colleges of Art and Schools of Architecture, RSA New Contemporaries is an important and exciting showcase of Contemporary Art. Selected from 2008 degree shows in Edinburgh, Glasgow, Dundee, Aberdeen and Elgin, the exhibition provides an excellent opportunity to view diverse and inspiring creative work from some of the country’s most exciting emerging artists and architects. The exhibition presents a comprehensive survey of new work including painting, sculpture, film making, photography, printmaking, architecture and installation, with a selection of works by each artist occupying all twelve RSA galleries. This in itself makes a statement, expanding the parameters of the RSA Annual Student Exhibition first held in 1976 and focusing national attention on the importance of creativity and vision in relation to our built environment. The prominence and visibility of the exhibition as a showcase is significant, providing public access to a wide range of artistic disciplines in a professional context.

Callum Chapman’s series of untitled digital photographic prints present an intriguing interplay between found and manipulated elements in his work. The staging of the photograph transforms insignificant or overlooked objects from every day life; a discarded cardboard film box, grains of sand, a matchstick or an arrangement of faded sheets, into images of imaginative recognition on the part of the viewer. There are irresistible hints of narrative here -both within and between the sequence of images, together with an unexpected sense of beauty, stillness and contemplation. In effect Chapman’s work slows down the act of seeing and most importantly makes the viewer look again at the ordinary or mundane. There is a compelling, dreamlike quality in the artist’s use of muted light and palette that naturally invites a state of meditation. Untitled 6, a subtle close up of a tabletop covered by a cloth of Broderie Anglaise is elegiac and strangely affecting. Delicate cut outs in the fabric juxtaposed with a strip of photographic negative placed parallel to each other create a strangely poignant and poetic image. Miraculously human presence permeates a scene populated only by inanimate objects. The negative spaces within the work are as physiological as they are physical, a wonderful example of the way in which the artist facilitates shifting perception in the mind’s eye. The gentle theatricality of these works operates beautifully as a stimulus to the imagination of the viewer.

In contrast Robert Black’s work in silver and digital photography confronts the audience in stark black and white. The manipulation of the image, particularly the obliteration of the human face and individual identity in For Pete’s Sake I, II and III is both brilliant and disturbing. High tonal contrast and the vigour of hand made marks add to the immediacy of the images. Beautifully composed, they are a thought provoking sequence -a representation of invisibility in our society and a depiction of what the artist describes as “people with a void in their lives”. Black’s Madonna (3 Parts) presents a fascinating narrative between the mother figure, infant and developing child. The image of womanhood in the triptych is challenging, unexpectedly dominant and provocative. Draped in tartan the image of the mother reads as stoic and unforgiving, rather than a representation cloaked in nostalgia or a romanticised vision of childhood. The expression of the older child moves from adoration to disappointment and despair in the sequence. This is a complex image of maternity, childhood and inferred nationality which is as engaging as it is disturbing.

Recipient of the 2008 RSA John Kinross Scholarship Teresa Sciberras has contributed an impressive series of large scale paintings to the exhibition, influenced by Medieval and early Renaissance art and demonstrating development of her own unique style of oil and collage on canvas. The Library of Babel is a superb example, a fortress of knowledge in burnt and raw sienna, orange, deep green and steely blue grey. The layering of materials and handling of paint create a beautifully weathered surface, built upon ages with the horn in the centre a symbol of the city’s demise. Sciberras achieves a balance between the cerebral and technical aspects of her craft, investigating the art of painting and the process “of construction, deconstruction and reconstruction” in symbolic representation of the fortified city. Her rich palette and use of texture give these iconographic images an immediate tactile quality whilst exploring the concept of boundaries; “to define inside from outside, known from unknown, self from other”. Viewing these works is like stepping into a labyrinth, with a magnificent balance struck between technique and ideas.

Winner of the Stevenson Award For Painting Stuart Lorimer demonstrates an understanding of figurative and abstract traditions in an accomplished and extremely promising series of oils on canvas. An exciting combination of realism, design and abstract techniques together with emotive use of colour contribute to the expressive quality of the work. Mother of Moonlight is a good example with two female figures emerging out of a deep umber ground. The artist submerges the viewer in his own unique iconography, adorning the savage otherworldly figure with decorative detail as she emerges from the stationary female portrait, perhaps her conscious self. Delicate detail is contrasted with looser paint handling investing the scene with a sense of movement and emotional intensity reminiscent of Francis Bacon. Halloween Parties with its acidic yellow, deep brown, rich red and ochre is a nightmarish vision which stands between worlds. The surreal juxtaposition of a Hopi mask and two female figures, one seated, one standing- her face melting into anxiety, sit uneasily beneath the murky shadow of a palm tree.

Among the exhibition’s highlights are some fascinating architectural explorations including Jane Mulvey’s architectural comment on urban banalisation The Collective Incubator, Rik Warren’s thought provoking and potent mixed media/ installation works; Society of Captives (Watch Towers-series of 30)and Ross Perkin’s inspired architectural vision El Cine de las Torres (Parts I-VII). Part of Perkin’s two year Master of Architecture at the University of Edinburgh, El Cine de las Torres represents a multilayered, exquisitely detailed vision of regeneration. Founded on intense research and fieldwork within the old town of Cádiz in south western Spain his proposal for a decaying urban space incorporates historical and artistic cross currents unique to the site. Built on a Roman circus Perkin’s “Cinema of Towers” incorporates archaeology, cinema, design and engineering utilising projection as part of an investigation of the “porosity of light”. Perkins has envisaged a series of integrated interior and exterior spaces which demonstrate imaginative engagement and understanding of the world of cinema, audience and spectacle. What is so inspirational about this project is the link between cinema as a collective dream space and the vision of architect. El Cine de las Torres is a work of incredible depth and complexity brought to life for the viewer in a series of mixed media displays including a beautifully elevated sculptural model.

Rosie Hughes – Jones sculptural installation Recalled Flavours of an Absent Place: Swarm Migration assaults the senses with its pungent sweetness. Hung by a series of threads the colony of silk and beeswax vessels beaded with honey and dripping to the floor is a powerful trigger of memory and association in the viewer. The olfactory response is immediate and provides an unexpected entry point to the work, leading the viewer around the piece and into their own interior narrative. There is also a sense in which the work is a display of precious chandelier like beauty, the creamy white of the silk and glistening honey reflecting soft light within the gallery space.

Artist, Puppeteer and Theatre Director Jeremy Bidgood has contributed an intriguing series of framed video and projection works to the show exploring the ritual of participation and performance in relation to the art object. The Male Gaze (Projection) is an innovative, humorous and mesmerising dialogue on the art of portraiture. Interaction with the work becomes the focus, rather than the presentation of a static individual. Our expectations about the portrait and the gaze of the title are playfully skewed. The gilt frame has an associative function, presenting the projection to the viewer in a traditional way on one level, but subverting the traditional function of the object with the use of the moving image. The changing nature of the work lies in the facial expressions and the naked face which is naturally interactive fuelling the illusion of a living exchange. The intimate scale of the work also heightens the sense of participation on the part of the viewer and makes this act conscious within the gallery setting. How we interact with the designated or sanctioned art object is a provocative subject for further investigation.

RSA New Contemporaries gives a tantalising glimpse of emerging talent. It is encouraging to see the range and complexity of creative investigations taking place in Scotland’s Colleges of Art and School’s of Architecture with all of the RSA galleries devoted to the promotion of this new work. This year’s show is an exciting beginning both for the participating graduates and for a new phase in the RSA’s Annual Student Exhibition.