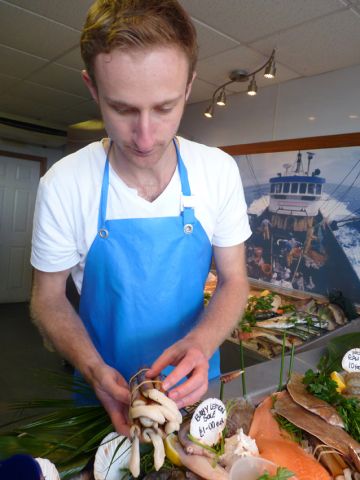 A co-current subject within visual arts practice and discourse seems to be the value of art – in relation to an urban/rural debate, residences as engagement or the viability of peripatetic arts festivals and the differing needs of artists in different regions. Ultimately this is about examining the worth of artists practice outside of the commercial art market. This was made more pertinent at a recent event Weekender, a newly launched residency project from artist-led space Cornwall Autonomous Zone (CAZ), in a basement in Penzance, Cornwall. As a space it still holds tight to its industrial past, and has artist-led written into it from the dusty floors to the bare brick walls and subterranean location under the Exchange Gallery.

The first incumbent was London based artist Sam Curtis, who presented his work via a short prepared talk. In itself, this was refreshing, as rather than simply showing and describing work as the majority of artists do Curtis outlined the propositions of artists making work in the current climate. He succinctly unpicked the proposition of the offer from CAZ, designed to ‘to offer a realistic option for artists who have full time jobs, children, and other obligations and responsibilities that normally make residencies problematic.’ Curtis opinioned a brutal truth of where a practice might be perceived as being a hobby rather than profession. This resonates with the fact that he has realised work through working in ‘stealth mode’ while being recently employed in blue-collar roles. This military conceit for secret activities, shadow movement and persona non grata is very much the embodiment of the Weekender proposition, how does an artist make-work if you have to work?

For the talk, Curtis presented a series of three pieces, or four if you count the presentation, including rejection letters for suggested residencies at Buckingham Palace and 10 Downing Street that explore this ‘work at work’ process. Harrods Fish Counter and IKEA 2008 and Cabbage 2009 are three short videos with mixed levels of stealth and documentary footage. Harrod’s Fish Counter documents the working environment and the character and behaviour of colleagues, in doing so the creativity and performative aspects in the job are brought to the fore, as is Curtis’ good natured humorous appreciation of his fellow workers. Using vox pop interviews and captured footage, there is a sense of a reveal in the video, fellow employee’s rationalisations of their roles but also the contradictions at play in the food hall as a destination and arena to create the ornate displays and perform for the public. In this environment, Curtis devised a way to practice as an artist while going about his job. This can be seen in essence not more than knowingness or a framing of an activity while behind the counter. How this changed his relationship with his employer and fellow staff, hence the necessity of ‘stealth mode’, while at work, being an artist, becomes the currency in the work, and the tension at play. The implicit discursive disruption of the power relationships is equally exciting and uneasy to grasp, not unlike stealing paperclips from the work place as an act of defiance. It feels like the genuine article.

The second video, IKEA, takes the stealth mode further as we are treated to footage of an employee going through training and then setting out stock on the shop floor. A voice over explains what we are seeing via a ‘gotcha’ style hidden camera. As in fish counter, relationships with the staff, usurping of the expected processes and creativity within the prescribed role as an employee is explored.

The final film, Cabbage, is an interesting mix between the first and second videos, a man in a market stall is carefully rewrapping Turkish Cabbages, again with a voice over, poetically describing his activities, with an strong Bavarian-German accent. The camera is fixed, unlike the secret IKEA video, and is more poetic in its presentation of the labour, and therefore more disconnected from the immediateness of experience of the Harrod’s Fish Counter and IKEA.

In this work the structure of employment and its value are over turned and pulled inside out, and the residency model described here is stretched to breaking point when, As in Harrod’s Fish Counter and IKEA, it is conceived as one sided, as not offered but taken, but is still a productive space to make work and money. Is this exploitation in reverse? This cannot be a reflexive space to make work, which a lot of residencies are designed to be, peer to peer or in gentle solitude, which is not the point, as the dynamic of the intent and the framing of the activity befit the work than solely what is produced or documented as an outcome.

Curtis reveals that IKEA and Cabbage are constructs, made to look and act like evidence. This might have been disturbing, a repetition of exploitation, this time of the viewer, provoking a questioning of the veracity of Curtis’s work.  Did he really work at the Fish Counter in Harrods? In part an answer to this, Curtis while resident at CAZ has devised a fitting project. He spent a day with a local fishmonger, Steve Bell from the ‘Fish Boutique’ in Penzance. The day was organised with CAZ, so the relationship and roles were made clear from the off, Curtis was the guest artist, and Bell the employee, the tradesman, but also the host.  For the shop his presence was an interesting diversion and additional offer to customers. The event represents a ‘coming out’ as an artist and the drawing to a point of a cyclical narrative journey from the Harrod’s fish counter to a Penzance fishmongers, from stealth to an assertion of his work as an artist.

Throughout the day, Bell keenly introduced Curtis to his customers as an artist. Customers responded by stating that they were aware of the improvement in the way the produce was displayed. Curtis’s presence provoked discussion about where the art in the store was; the display or Curtis’s activity? Or the new relationships and conversations that were being formed and made through out the day? His presence as an artist in active mode suggested that art was taking place or was present. In this sense, Curtis’s practice could be described as another intangible commodity on offer in the shop. Importantly there was no demarcation in the space of any art taking place, only being discovered through conversation and engagement with customers.

There seems to be a completing of a process or circuit with this latest work/performance for Curtis. No stealth mode is in operation and there is direct and open engagement with the audience as an artist. The ‘outing’ metaphor might seem obvious, but this work feels celebratory in relation to his earlier work. Curtis admits to having experienced that very normal early career struggle with calling himself an artist, in owning that identity in a real and principled way outside of contact with his immediate peers, and it seems right that he can now do this back in a fish mongers where his journey began. What is also clear is how his process of working, his position as an artist, is engaged with brokering those eternal question – Why make art and for who? In not letting the weight of these concerns shut his activity and dialogue down, he rightly continues to open the proposition up and reveal a veracity and energetic promise of pugnacious questioning, part art and part answer.