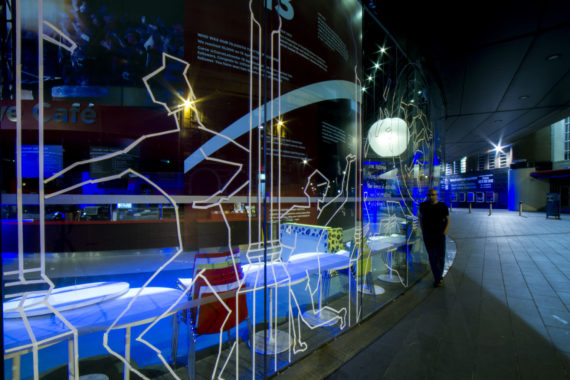 “Lets embark together on a journey from hyperbole to excellence. Let’s acknowledge that we are an emergent city with exciting opportunity ahead of us but, we’re not world famous yet. We need to get much better at shouting about what we are good at and be realistic about what needs to improve. And to get there, we need to be honest, be brave, be ambitious and above all, be fearless. And together we can all make Leicester a true City of Culture”.

Stand back far enough and you stop seeing your reflection in the large glass panels that encompass the theatre. Instead you become enveloped in the gargantuan artwork that is Sanskriti Graffiti. One wonders what all this means beyond pattern and to that end I would like to imagine that this installation is a fragment of an elaborate multi dimensional map showing the inner workings of G Sian’s mind.

Like a provocation to movement, the work demands that you follow it around the building, darting back and forth as you see areas that you missed. As the eye focuses on the clean static lines on the animated glass one feels the tension between perception and perspective. The field of view shifts erratically as you process around the pellucid fullness of the theatre flicking between the linearity of the installation and the void behind it.

Follow the lines and they take you beyond the understandable, comprehensible architecture of the physical world into a place that is purer but also as chaotic as it is ordered. Stand too close and the space feels animated as the multifaceted nature of G’s thinking flows through. Every area of the arts in which G has endeavoured including cinema, painting, theatre, design, linguistics, classics, and a love of good strong coffee coalesce to form a cognisance of the complexity and fragility of our humanity.

As I look at the installation I remember a conversation with G in which he spoke of the epiphany at the tender age of four years when he just knew he was an artist.  Not, going to grow up to ‘become’ an artist – he was an artist just as he knew he was alive. To put this into context, this second generation migrant boy, raised in the working class West End ward of Leicester felt that he needed art just as much as he needed to breathe.

And yet, this installation is not the leitmotif of G Sian’s work. Instead it is one note in a repertoire of creative engagements.  Sanskriti Graffiti is an ephemeral point on this journey from the age of four, when G Sian visualises the breadth of his understanding of the world.  The installation is a deep exhalation of cultural matter from another dimension that asks to be considered not just glanced at.  It means so much both with and without words and yet could be misunderstood and ignored by some who see it as ‘foreign’.

While I was writing this text I remembered Fiona Allen’s keynote speech at TEDx in 2015. I had discussed this speech at great length with G and what is striking is that we in Leicester are not accustomed to our own potential.  It is quite telling that the work sits on the outside of Curve as in many ways this type of work is the outsider – a kind of alien being that visits the city to abduct our senses even if only briefly and perversely, it seems we are left without any memory of it.

The scale of the work makes one consider the audacity of such an undertaking.  The epic proportions of the work have been meticulously planned for weeks, months and years as G explains “[planned] in diminutive pocket books – and some drawings have been stored waiting to be exposed for nearly 20 years”.

To finally see the work take shape at such a magnitude feels otherworldly and edifying. If we want to see change in Leicester’s cultural landscape we need to embrace these types of exuberant maverick shenanigans and boldness of ambition.
A Text created in response to the installation by G Sian, Titled Sanskriti Graffiti at Curve Theatre, Leicester.