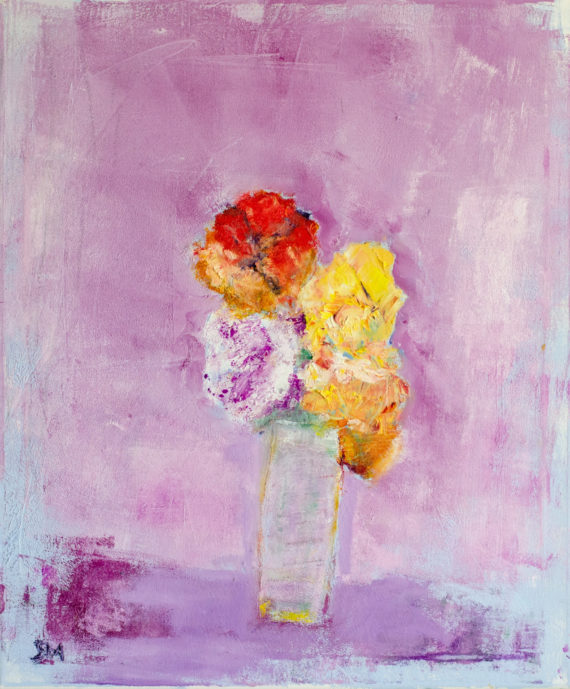 In her twenties and thirties Sarah Money was a dancer and mime artist; now, in her middle years, she’s a painter and sculptor.

“I’ve been an artist all my adult life,” she says, relaxing in her ‘Willow Barn’ painting studio, a converted shed in a field in Golden Cross, a mile or so away from her Chiddingly home, surrounded by horse fields. “I’ve just changed the mediums I work in. But it’s all connected. It’s all about flow, and movement.”

She’s wearing a red and white gingham dress. Her labradoodle, Balou, is at her feet. It’s a gorgeous late-spring day. There’s a work in progress up on an easel: a canvas thickly primed with white oil paint; another one behind has been worked a little further, with vivid impasto gestures – perhaps a sun, in a blue sky? There are tubes of oil paint everywhere, but there isn’t a paint brush in sight. “I don’t use them,” she smiles. “I use a spatula. I load it on thick, and scrape it back, load it on, scrape it back. There can be up to six or seven layers of paint on the canvas, before something emerges. Sometimes I have to step out into the field and look from afar, before I can see it.”

Picasso and Van Gogh are big influences, she says. But more recently she’s been taken by the work of three 20th-century female abstract expressionists, Elaine de Kooning, Lee Krasner and Joan Mitchell “for their balance of colour, movement and depth”. Did she know that De Kooning was also a dancer, who described painting as ‘a verb, and not a noun’; that Mitchell was a champion ice skater? “I didn’t,” she laughs. “But I’m sure there’s something there. The energy they put into their work, comes out of their work, too.”

She’s largely self-taught, as a painter. “It was my grandson Louis who led me into it, when I was in my fifties,” she continues. “I watched him drawing, when he was very young. There’s so much freedom in the way children paint. It hasn’t been tainted, and put in a box. I was inspired to take up painting again, after many years away from it.”

At first she produced pure abstracts, but is evolving into a more representational style. Flowers are a common current theme, though you’d be hard-pressed to identify their species. “They’re not still lifes,” she smiles. “I spend a lot of time with flowers, but I don’t put them in front of me and paint them. It’s all from inside me. The paintings emerge from how I feel. They aren’t real flowers. They are the idea of flowers.” 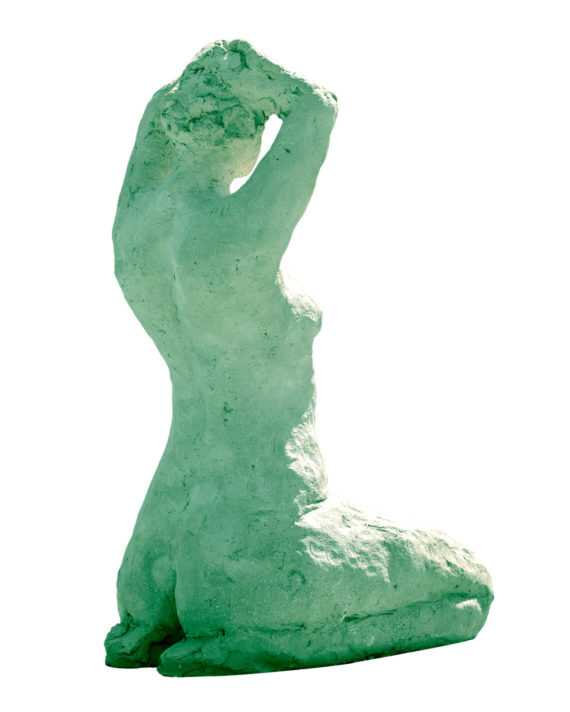 She studied sculpture at school, and took it up again in her forties, after a long hiatus. She’s tutored by Rose Beale, at Paddock Studios in Lewes, where she attends life classes, and eventually fires her clay sculptures. She has another shed-cum-studio in her back garden, where she works on these pieces, mostly of rough-textured female nudes. She brings out a book about the late Brian Taylor, and the bronze busts and animal sculptures he produced. “I fell in love with his work when I first saw it,” she says. “It can be quite disturbing to look at; it’s not at all pretty. But it’s transporting. It takes you somewhere. I love his work, the emotions it evokes. Its intensity. That’s what I’m aspiring to achieve.”

She also cites the sculptor Emily Young as a big influence. “It’s amazing the way she produces these half-finished heads, which emerge from the different types of stone she works with. She sees them in there, and lets them back out. I’ve worked in stone a little, and it’s definitely something I’m going to explore in the future. It’s very… it’s very physical.”

She’s working hard towards producing a body of work for her first big solo show, at the Star Brewery Gallery in Lewes, in which she’ll display examples of both her sculpture and painting. It will be interesting to see if these artworks manage to evoke, from their static setting of wall and plinth, the flow and movement that goes into their making. Has the former dancer succeeded in making her creations dance? Has the former mime artist pulled off the transformation of noun into verb?

She’s not nervous about the audience’s reactions. “Quite the opposite,” she says. “I’m excited about it. I know who I am and I know what I do. I’m looking forward to being able to express that.”