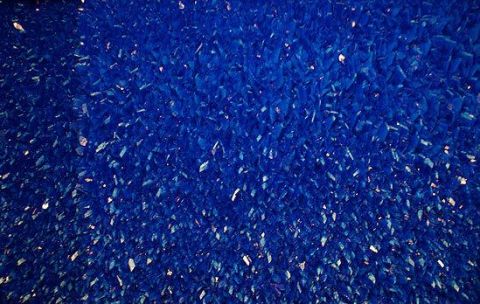 Artangel commission ‘Seizure’ was initially open in Elephant and Castle in South London between September and November 2008. Having missed it the first time around, I was delighted when I heard the announcement that it was to reopen in July 2009. The installation, as you’re probably aware, is located within a block of derelict flats scheduled for demolition. It was constructed by pumping a set of rooms full of 75,000 litres of copper sulphate solution through a hole in the ceiling. The result is a brilliant blue crystalline structure, growing in a formation that completely covers every surface within the room: walls, floors, ceilings and an abandoned bathtub.

Unfortunately, a little like seeing the Mona Lisa or the Statue of Liberty in the flesh after a million reproductions, ‘Seizure’ conceived by Turner-Prize nominated Roger Hiorns was decidedly underwhelming. Like the examples mentioned above, the disappointing reality was that the installation was a lot smaller and less impressive than I had expected. Whilst the colour and form of the crystals were undoubtedly beautiful, I already knew that they would be. The exposure the project received had given me too much prior knowledge of the work and nothing new was revealed through being immersed in the installation. I found I was left cold by the experience. It wasn’t alien. It wasn’t awe inspiring. It was almost ordinary. Frankly, once you’ve seen one crystal…

However, the project turned out to harbour two very unexpected gems. The first of these was the elegant modernist architecture of the derelict low-rise flats where the commission was housed. Designed around a paved courtyard area, the grand central staircase leading up to the first floor flats was formal and clean-lined; the windows and doors boarded and bleakly beautiful. The second gem was the interior of the flat adjacent to ‘Seizure.’ Entering the building via a short corridor, directly ahead was a small, dark and empty living room, with a faded paper boarder and a tiny kitchenette. It was this vacant space, I presume left accessible in order to compare it with the crystal-encrusted one, which exerted an emotional power for me and provided the sense of discovery that was lacking from the installation. The melancholy traces and detritus of a life past were held in stark contrast to the gaudy spectacle of the bright blue crystals.

‘Seizure’ is detached from its context, isolated in its brilliant splendour. It receives attention while the rest of the building is neglected and ignored. It was this abandoned space, with its rich history and dramatic future that was the real find. This was where the intimacy and the tension was found, as I discovered a secret, private space, inadvertently revealed through Hiorns’ shiny blue spectacle.