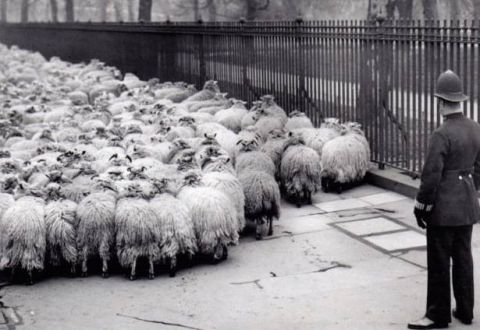 Rural depiction has always been troubled with two interlinked critical concerns, firstly the notion of the countryside as a constructed and man-made situation full of all its power and privilege implications and secondly the issue of sentimentality towards farm animals, and their inevitable cuteness.

Back in the eighties I recall an intense conversation with a bald headed neon artist who somehow felt animals were simply not subject matter for the serious artist. I still argue the success or failure of any art lies in its positioning within a wider set of critical understandings not its visual content per se. The challenge then for the ‘animal depicter’ is to distinguish their output from the bucket loads of cute anthropomorphic cuteness that dominates TV, Card shops, garden centres and naff domestic galleries. It’s not that animal art cannot embody a cute quality, but it needs to understand this and bring something more to the table if it is to be taken seriously by the rest of the art world.

An exhibition with the title ‘sheep Sketchbook’ could easily enter the domain of the naff in a bad way, but it signals it serious intent by the suffix ‘revising the pastoral tradition’. The show is at Antenna, a Nottingham hangout for media sorts and a most urban venue. As you enter the reception you are greeted by Georgina Barney’s carbon copy wallpaper sheep motif wallpaper, on which hang lightly executed framed quick line drawings of sheep. This references cosy domesticity and is nicely counterpointed to the venues, chic hotel aesthetic. The carbon copy wallpaper images appear printed and bring in layered references to mass production, dolly the sheep and global emissions. All issues far from the natural. This work is tight, considered, well executed and rewarding to the viewer both visually and in terms of thinking.

Beyond reception in the main area is an eclectic ‘gallery wall’ showing various works from Barney’s wider project a book exploring the Henry Moore sheep sketchbook as a departure point. Featuring an curious mix of other artists work and assembled objects and paraphernalia. A Shaun the sheep rucksack, and image of Gordon Ramsey, looking somewhat unhinged, clutching one of his soon to be eaten sheep are amusing to look at, and these mixed to create hanging which in part encodes a folk museum aesthetic. This is visually greater than the sum of its parts, and they combine to set up a valid set of inter relating strands to interrogate the over- arching theme.

Drilling down into the grouping, three artists clearly stand out from the mix. There are more of Barney’s images, which are lightly sketched and very ‘honest’ works. Kate Genever has contributed a tall thin graphic image ‘Neither work nor leisure’ of a Shepherds crook which evokes ideas of the church, bishops, faith and power and is particularly pertinent as I write on an Easter Monday. At the bottom of this image, are what appear to be carved graphite matchstick shapes, suggesting again the notion of construction and a heavily code symbolic. Kasif Nadim Chaudry work ‘Fleece’ whose immaculately executed pastoral folded printed paper deals with sentimental imagery of cute children with ringlets tending to sheep in an appropriated illustrative historic imagery. It balances production values and subject examination without any cynicism.

This commitment to honest examination exudes from the broader exhibition project and is to be applauded. The whole project avoids the turgidity of much research driven work, and is provides the onlooker with work for the eye and brain to do, regardless of your opinion of sheep.