Side-tracked by the glitz - a-n The Artists Information Company 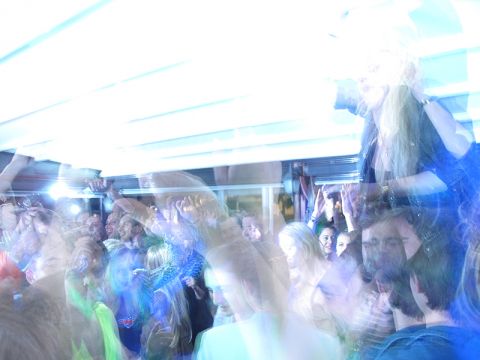 So you hear Leonardo Dicaprio’s on the island and Elton John’s hanging out at the bar, even who you sit next to on the plane seems to be on another level to the point that when you’re finally acclimatised, you find yourself dancing next to Jarvis whilst watching people get naked or your gate-crashing yacht parties.

One may have presumed that this was what Venice was all about, and in some respects it very much is about the glitz and the glamour promoting its sizeable girth with how big your yacht is; how big your Pavillion is; how big your queue is; how big your art is…. but as we all know, size isn’t always everything, it’s what you do with it that counts…Yet, unfortunately for me it came down to who had the best stories about the night before that provided a far more interesting interpretation of the Biennale than the art on display. Much like an art fair, the grandeur of the Venice Biennale was spread pretty thick and for me, the whole facade became a hyper-real example of the “celebrity” and what it means to have “success” and “wealth”.

Alongside the glamour there were a number of inspiring artists and exhibitions worth spending time with such as; A Starry Messenger by Bedwyr Williams at the Wales Pavillion; oO by Raimundas Malasauskas for the Lithuanian and Cypriot Pavillions, and Palazzo Peckham by Lucky PDF & Hannah Barry Gallery, London. Nevertheless, I could have quite easily only visited Massimiliano Gioni’s curated section of the Arsenale and I would have been satisfied with my first-time Venice experience; Cindy Sherman’s curated section of the show was great, and the work of Camille Henrot really stood out for me.

But the highlight was without doubt Ryan Trecartin’s five-screen video installation with staged seating environments called “sculptural theatres” by Lizzie Fitch. Hosting a cast of fascinating individuals acting out self-referential roles in a twisted reality, contained within a fabricated environment that included themed zones (think of a cross between The Crystal Maze and The Word), with a hot tub, a spinning bed, tiered seating, moveable stages released from the floor and ceiling; and a few toilets thrown in for good measure. Imagine, Jerry Springer does Keeping Up With The Kardashians does Takeshi’s Castle does MTV cribs all in Oprah’s TV studio, being streamed live over the internet with features you might find on EuroTrash and you’ll only be part-way there to even imagining what this world was like.

Not being able to stop thinking about Trecartin’s work whilst brushing shoulders with the giants of the art world, admiring the scale of the yachts and after days of drinking Prosecco for breakfast, I realised that the my idea of Venice and these large-scale events that take place in our contemporary art calendar, help to forge as much of a celebrity culture as the television or trashy magazines. The creation of the celebrity is just as relevant within the art world today as it ever has been.

For me, it was meeting Rachel Lord, a member of the cast from Ryan Trecartin’s video installation and winner of Dora Budor’s reality art TV show, “New Lavoro” at Palazzo Peckham, that created a significant moment in my understanding of Trecartin’s work. Perhaps to some, Rachel was an insignificant other, a nobody, a mere participant in the “real” artists work; but to me, she became this icon of what it meant to represent the idea of the “celebrity”. She appeared to aspire to be a famous artist, to be well known, to be recognised; for me, she represented what Trecartin (and Budor) were aspiring to suggest – the hyper-reality of real life media culture; and because I had recognised her, I had closed the system and looped it back onto itself, creating an awareness of the celebrity whilst fighting with the aspiration and reality of this representation; that which is both a success and a failure.

Candice Jacobs is an artist currently living and working in Nottingham. Â  Modes of enquiry include exploring the relationship between boredom, repetition and meaning and how these elements exist within our everyday lives; the relationship between work-time and leisure-time and our connection to popular culture, the media, television, soap operas, celebrities, advertising and branding within these two time periods; and the idea of collectivity and collective memory. She is the current programmer of the Attic at One Thoresby Street; founder of www.sleepingupright.com; and co-founder of www.onethoresbystreet.org, www.mootgallery.org, www.standassembly.org, www.sideshow2010.org.