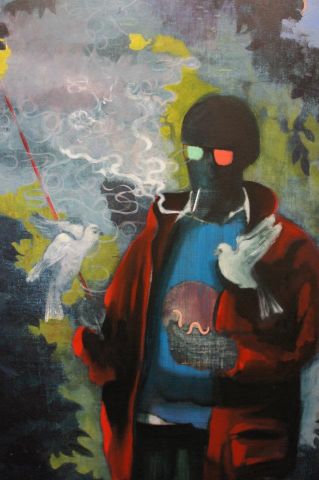 Simon Burton is lost and blind. I don’t mean this literally of course: he can see and at the time of writing he is in London, a place where he has lived for well over a decade, in his gallery (I’m sure he can find his way home). Metaphorically he is lost and blind though. This may seem like an insult to an artist, but it is not. In fact he has just told me so himself. All but one of the paintings in Nowhere Men are dark. Perhaps he is not totally blind, but he is in the dark. He can see enough to make his way through the forest but he can’t really see beyond the trees. Burton’s painting process is more myopic than blind, he becomes totally involved in small sections of painted surface or in process, not really taking in the whole picture until he returns to the studio the following day. He is lost philosophically and culturally. He is searching for the meaning of life, or at least meaning in life, and he is doing this by making paintings. More often than not his paintings (in this show at least) are inhabited by a solitary figure, perhaps emphasising the solitude of the blind or the lost. In “Fishing Man” (details pictured) the figure is not solitary, but accompanied by a small dog and five doves. The dog is reaching, in vain, for the worm on the end of the man’s line unaware that there are worms available on the floor. At the same time the doves appear to be effortlessly taking the worms directly from a tin the man is holding. The man is also wearing 3D glasses, for no apparent reason. The shapes of the leaves, and the shapes in between leaves, form a kind of jigsaw background to the painting. They oscillate and move over one another, operating a bit like a magic eye picture. Perhaps these tropes serve to remind us that painting is all about looking and that all may not be as it appears upon first glance, and that Burton himself is looking, searching for meaning by making paintings.

An artist knows more about life than anyone. Imagine, everyday you wake up and do what you want. So what do you do? No one tells you, or asks you to do anything, you must decide. Burton sees getting up and making his bed, or making his breakfast in the same way he sees making paintings: it’s part of his daily practice, part of living. Burton moves paint around the canvas like a child playing with their food. He scrapes and sands back the surface of the painting like an archaeologist, searching for something by removing layers of soil. Sometimes this is tedious, banal, boring but sometimes it is exciting and these daily emotions form part of the living history in the painting.

The paintings are all very gestural, and hand-made. You can see the artist’s hand-made brush strokes. For Burton this implies a clear distinction between his “made” work and the manufactured paintings of the 1990s: one thinks of Gary Hume or Ian Davenport, obviously, but also Chris Ofili (no gestural marks here) and many others. Through hearing Burton speak it becomes clear that these paintings are a form of resistance. Resistance against what he calls the tyranny of such manufactured paintings, and the contemporary tradition to make sets of a dozen or so near-identical paintings for exhibition. They are also resistance against the tyranny of strict rules in art, as Burton claims to try to break his own rules when making the work. Also they are resisting the tyranny of minimalism or fashion or convention. In this sense we can see his work as political. His ethereal yet dark places are exotic and offer us escape into strange and different worlds. Indeed, escape for history.

As he fumbles his way on a search for meaning he makes mistakes, erases mistakes, then re-makes mistakes. In this way “John Bigg” (pictured) is more of a ruin than a portrait. The canvas started off much larger, 4-5 feet before being cut up and stitched back together again, with a stitch line running right through the centre of the painting, like it has been folded in half. Burton emphasises his process over subject matter, which he sees as relevant mainly as a way in for the viewer. However, by titling his paintings with names of real people he does give us another way in. We can google “John Bigg” and find out who he was. John Bigg was potentially Charles I’s executioner. He became a hermit after the restoration. Every day he walked eight miles to the nearest town to collect food that people were prepared to give hermits. He also asked for bits of leather which he stitched together. His boots can be seen at the Ashmolean in Oxford, complete with attached leather, organic, growing. Is Burton likening the artist to the hermit? After all, artists do, indeed, remove themselves from “normal” everyday society to work, more often than not, alone. Burton also takes images from art history, and borrows titles from historical paintings, as with “Where am I from, who am I, where am I going”, the title of which is lifted from a Gaugin painting and figure is taken from a Raphael tapestry in the V&A – not as a direct transcript though, as Burton has an uneasy relationship with appropriation, which he sees as a type of theft.

Burton is influenced by his everyday activities. While making this body of work he was thinking about gardening a lot. He sees little distinction between gardening and painting. He thinks of the act of planting and cultivating a garden as “training” plants and flowers: you have some control over what you plant and where but ultimately they are living things, they can “grow wrong” or not as you expect, or shrivel up and die. In the same way Burton’s paintings are living entities. They also grow, evolve not as he expects (sometimes) and in some cases they even shrivel up and die, as with “The Gathering”.

As it says in the press release, Burton’s paintings seem more like remnants than pictures. Remnants of the remains and residue of accumulated failures which produce mystical and enigmatic narratives.