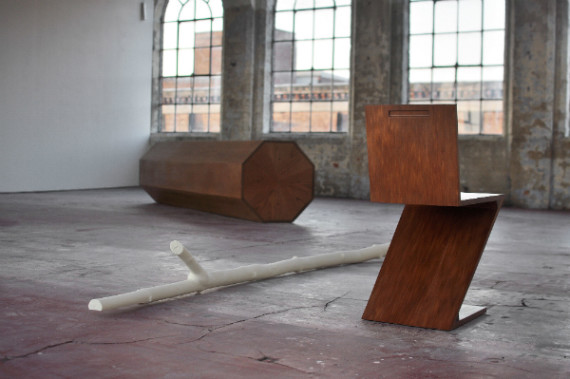 There are some artists who are so imbued in media and process over narrative association and potential that it is challenging to give over the essence of what they do in words. You’ve simply got to go see and  soak it up. At the opposite end of the spectrum some artists are so given over to concept over form that physical encounter is not really required, just the anecdote.

Others like Simon Starling are very much artists of ideas and stuff, embroiled together in a glorious interplay of fact, knowledge, form and wonder. Starling manages to interrogate the everyday in a curious and uplifting cocktail of physics, archaeology, conceptual art and physical presence. And from when I first met ‘Shed Boat Shed’ he had me hooked.

This show is in two parts, in two contrasting venues.  Some of the larger and more visually extravagant aspects of his work are place in the immaculate galleries of Nottingham Contemporary.  The staff donning ear pieces and uniform tops, all adding a sense of importance. First on show are the distorted shiny forms ‘The Nanjing Particles’. Visually these occupy an enticing territory someone in between aspects of Thomas Schütte and Henry Moore, with a tad of Cragg thrown in for good measure. One can enjoy them on this formal level but to get the full richness of the work, on has to read the back story. Indeed with Starling this is key to his creative process. These are forms magnified one million times from silver particles taken from photographed copies of a stereoscope photograph taken in 1870 of Chinese workers in a USA shoe factory. The sculptures were manufactured in a foundry in Nanjing, China. Then shown at Massachusetts Museum of Contemporary Art, North Adams, the site of the shoe factory. Thus completing the cycle.  This ongoing journey of an idea is a key aspect I enjoy about Starling. He has an ability to deal with historical and other academic information through sculpture which both informs and delights, but never lectures.

Another high impact work on show is his conversion of a printed half tone photographic image into hand blown black glass balls referring to the former function of its first gallery as a French bottling factory. Indeed physical catharsis is a key continual thread and the show which includes ‘Blue Boat Black’, where a Victorian discarded museum display becomes a boat, is used to catch fish off the coast of Marseille, then becomes the charcoal to cook the fish. Displayed as a table top remnant field evocative of a car manual, this work brings both a big visual and conceptual reward.

When you get to Backlit, there is a sharp contrast in spatial aesthetics to Nottingham Contemporary. The spaces are in good order, but worn through the passage of time. The work is invigilated, but in plain clothes.  Backlit has the strong sense of place encoded by its prior industrial function.  This marriage between an artist who excavates the past, an artist who explores and uncovers material connections and who examines the specifics of place is a perfect fit. The work here is also more understated.

There is carefully considered the placement of work which sits very well in a site reflexive manner. Situated on the cracked industrial floor, ‘Nine Feet Later’ presents a subtle and rewarding investigation of time and assumptions. A first glance show a Rietveld modernist Zig Zag chair. A secondary investigation reveals it to be made from New Zealand Swamp wood some 45,000 years old.  Adjacent to this lies sections of a 15 million year old petrified tree trunk. In the same room a 3D printed birch branch produced in a few hours looks like a small Giuseppe Penone striped tree work. With these inter connections, the brevity of modern ideas is brought sharply into focus. It’s also as if he is testing your powers of observations and playfully reminding you to look again and look properly this time. This unearthing of assumptions sits very well in a digital world of snaps judgements. It is art that gives greater and greater rewards over time.  It is art well worth the effort.

This emphasis on earthbound reflection and wonder extends to an invitation to ponder aspects of space, time  and the wider cosmos, with ‘Blackdrop’. A film work narrated by yet to be ‘Doctor Who’ actor Peter Capaldi. Here he explores attempts to measure the Transit of Venus, the point when Venus travels across the surface of the sun. The imagery combined with the gravitas of Capaldi’s vocal delivery, is as informative as it is encapsulating.

In the adjacent space, two seriously thick large circular mirrors offer the 2012 transit of Venus as it was observed in June 2012 from Tahiti and Hawaii. Standing between them invites a child-like interaction as ones image gets flipped, massively enlarged and distorted. Their immaculate surgical quality forms juxtapose sensuously against the rugged walls and windows of Backlit.  As with all of his work ‘Venus mirrors (05/06/2012, Hawaii & Tahiti inverted)’ 2012 is uplifting and rewarding but is much, much more. It is this ability to distil complex aspects and thinking into enticing and visually rich form that separates Starling from so many other idea led artists.  It is big art with a human voice. And at both sites it is also a masterclass in how placement is of prime significance.