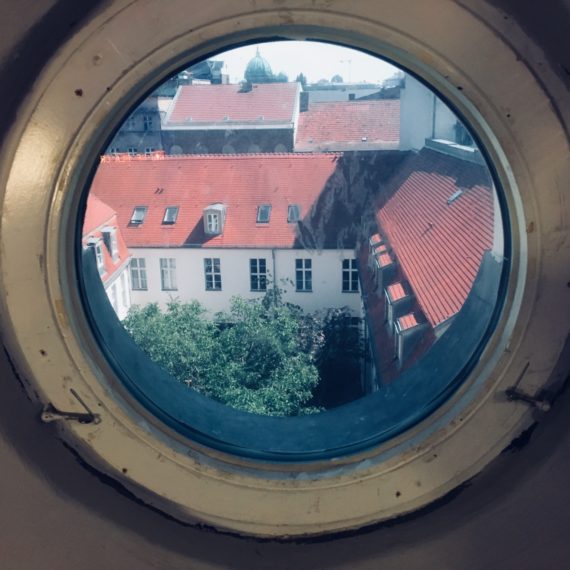 The Aperol Spritz from last night has left behind a sourness that is somehow a surprise. How can something that tastes and looks like vitamins haunt you so. It is a fiendishly warm day in Berlin and I am struggling to compose myself in a biennale-appropriate manner as sweat trickles quietly down my crevices.

To my left is a rope barrier designating a performance area. To my right is a wall covered in hand-scrawled notes of the dear diary variety: hurts, hopes and dreams. On the wall in front of me, a printed text describes a series of protests in Southeastern Nigeria around 1929 that became known as the ‘Women’s War’ or ‘Women’s Egwu’. The Igbo term ‘egwu’ is translated as ‘dance’. Groups of women occupied the private compounds of colonial officials, dancing and singing with the aim of humiliating the administration into attending to their grievances. The text points to the quality of visibility – the potential to ‘make visible’, that links dance to protest as a form of resistance.

My invitation has come from a person in loose fitting clothing with a serene disposition. I see her looking at me as she lifts the rope barrier but I don’t immediately grasp that it is me she’s beckoning, as there are a number of people nearby. Before I’ve had much time to consider my options, I’m sitting inside on a bench with a curved, inclusive design, searching my mind for something to share with my cool companion.

She wants to know if there is anything I wish to express that I have been unable to express for any reason. I understand that I should say yes, but feeling the inner adolescent trying to push its way out like a blind pimple I say, no, not really.

Realising that I might be here for a while, I change my tack and tell her that I find most of the spaces I operate in to be relatively open in spite of my awareness of the alarm-bells that sound whenever a person professes their society to be an accepting one. Put more simply, I do not regularly feel the need to supress my ideas or feelings. I recognise that I am very lucky, that there are reasons for this ‘luck’. Having said this, I sometimes feel most restricted and encounter censorship in spaces whose mandate it is to be inclusive, that dissent is not necessarily tolerated in such spaces. I tell her that while I support and occasionally try to initiate forms of open-ended discussion, I regularly find myself in an echo chamber or smothered by defensiveness – my own and others’.

She says with an angelic smile. I begin to settle into my role. I find I have more to say. I tell her that in spite of favouring confrontation over other methods when it comes to conflict, I have found that the former produces mixed results. Sometimes confrontation results in clarity, compromise, a quicker return to an even temperature between people. Other times it serves to alienate.

She tells me about a close friend of hers who she felt forced to confront in the past. The friend has since drifted away from her completely.

I say, arranging my face with compassion. I ask her if she regrets having confronted her friend. She’s not sure. She suggests that sometimes things end and that does not necessarily take away from what they once were. I mumble something about resolutions rather than endings.

Now we are conjuring three images relating to what we have discussed. She offers the image of a bridge and also, maybe, a circle – something without a clear end. I say that something without an end reminds me of snake eating its tail. A friend of mine is preoccupied and terrified by this image which is also a symbol referred to as ouroboros. In the year since my friend first spoke to me about this symbol, I have proceeded to see it everywhere. I know that this often happens when you are introduced to something new but I think ouroboros might also be trending.

She guides me to a place where I remove my shoes. The area with the benches leads into a double-volume chamber. It is made up of frosted plastic sheeting covering a wooden frame the width and length of a large room. The frame is open at the top so that visitors to the biennale can look down into the space. The floor is a slightly raised wooden platform. In the room there are three or four people moving around, walking, writhing and making sounds. There is also a sound that is coming from the space itself, a recording. It is a non-specific humming-moaning. It is not very loud but pervasive. It melds with the noises that the figures inside are making or the other way around.

My guide tells me that she is going to choreograph a series of sounds and movements relating to the three images that our discussion has produced. I will follow her into the cling-wrapped room and mimic what she does, at my own pace, and at some point, when I am comfortable, she will leave me there.

New tributaries of sweat find my spine. Together we take three deep breaths before she leads me into the room. I try to imitate her calm as we walk slowly to a corner of the room. She begins to rotate her arms in the shape of an 8. Her 8-shape loops gracefully on either side of her body in a movement that seems simple but that I can’t manage to imitate without bumping into either her or myself. My 8-shape is like I am 8 and practicing my handwriting. She is managing to move and create this effect while walking slowly around the room. I am concentrating very hard. I am struggling to walk and move my arms and not look up at the curators, artists, collectors and misc. celebrities that I’m sure are looking down from the balcony.

And then she hisses,

So I hiss too,

I am concentrating so hard that I don’t notice the approach of a silver-haired person with her eyes closed and hands out, who was previously thrashing around on the floor. She alerts me to her presence with a heartfelt,

Others join our hissing and swaying. Momentarily I enjoy the feeling of being part of a group whose actions are likely mystifying onlookers. I enjoy the idea that people might be looking at us and thinking that there is some kind of concord between us, something driving our rhythms that they are on the outside of, that they can’t access. I’m not sure I can access it either.

Easing my hissing, I move steadily away from the group and out of the room. I put on my shoes, continue my tour of the KW Institute for Contemporary Art and avoid eye contact for a good hour afterward.

I read later about the piece, whose title, Sitting on a Man’s Head, is an idiomatic term for the form of protest alluded to in the wall text. I like the title and I am excited by what I learn about the resistance, all the more because of its relative effectiveness in the face of colonial and patriarchal oppression in Southeastern Nigeria at the time. I am not especially convinced by its resonance with the participatory performance I encounter at the Biennale. My companion was generous and open. I had something like fun there, but the tidiness and order of the piece, the room that is supposedly ‘empty’ in spite of its position in one of the main buildings of an international biennale of contemporary art, the mechanical fluidity of the choreography, this giant tupperware for our feelings, has more resonance with a yoga class.

I miss the feist, wit and savvy of what I have been told of the Women’s War. My experience however, may well be a symptom of my own inhibitions, what I failed to bring to the space. I can’t even touch my toes.

Sitting on a Man’s Head is a collaboration between Okwui Okpokwasili, Peter Born and a number of artists based in Berlin.

Chloë Reid is a writer, artist and curator based in Glasgow.