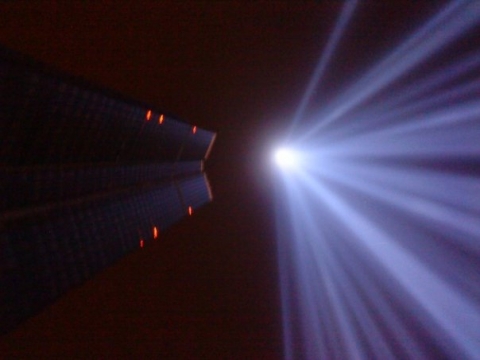 Paris’ night sky is illuminated with blinding white light beamed from scores of highly powered architectural lamps in international artist Ryoji Ikeda’s major new commission, spectra [paris] for Nuit Blanche, the city’s annual ‘white night’ contemporary arts festival. Developed in tandem with Forma, one of Europe’s leading creative production agencies, working with British and international artists to develop and deliver new projects across the world, the work focuses on the minutiae of ultrasonics, frequencies and the essential characteristics of sound. Music, time and space are shaped by mathematical methods as Ikeda explores sound as sensation, pulling apart its physical properties to reveal its relationship with human perception.

The location next to Tour Maine-Montparnasse, a 210-metre (689-foot) tall office skyscraper and the tallest in France, emphasises the projects scale. Designed by architects Eugene Beaudouin, Urbain Cassan and Louis Hoym de Marien and constructed from 1969 to 1972, the view from the top of the building covers a radius of 40 km. However, the tower is dwarfed by Ikeda’s complex installation. Occupying an overall area of 196 sq m on the North face of Tour Montparnasse, spectra is formed by a grid of 8 x 8 high intensity, narrow beam floodlights placed at 2m intervals apart. These 64 floodlights create an intense tower of light observable across Paris.

The grid of lamps is accompanied by a matrix of speakers, broadcasting a geometric pattern of sine waves of varying frequencies. As each viewer moves around the installation, their own interpretation of the sound alters depending on their position and that of others around them. I found one of the most interesting aspects of the work to be witnessing the responses of members of the large crowd gathered at the Tour Montparnasse. These ranged from playful excitement or complete disregard to apparent religious experience. I observed one person holding his hands in the air, head up, eyes closed. Presumably a fan of Mulder and Scully then…

Forma’s productions are renowned for facilitating a wide range of technical, scientific and artistic collaborations. The media release makes reference to the paradoxical concept of beauty and the sublime. Ikeda sees beauty as ‘crystal: rationality, precision, simplicity, elegance, subtlety.’ The sublime is ‘infinity: infinitesimal, immense, indescribable, unspeakable. Mathematics is beauty in its purest form.’ Both terms have become slightly loaded and taboo, and it is to Ikeda’s credit that he navigates their connotations whilst avoiding any literal historical burden. Such terms attempt to describe the intrinsic properties of human experience, the systematics of which Ikeda’s work undoubtedly highlights.

spectra [paris] raises issues of social theory and the dimensions of social reality, and I am interested to see how Ikeda can examine this further whilst finding an equilibrium between the visual/auditory experience and science. In a forthcoming exhibition at Le Laboratoire, Paris, Ikeda will present three new works inspired by a series of discussions with Harvard mathematician Benedict Gross about the controversial mathematical concept V≠L. The media release states ‘More than just a mathematical equation, this expression inspires contemplation of that which we cannot perceive, which can lead to a transcendent experience of the sublime.’ Central to the new exhibition are two panels, each consisting of over 7million digits. The first is a prime number, the second a random number generated by a computer. The piece exposes the fundamental nature of a systems-based practice where order and rigidity can avoid fatuousness to produce something aesthetically rewarding. This is very much reflective of Le Laboratoire founder David Edward’s diversity as a former biotech researcher best known for his research into needle-less vaccines.

Fritjof Capra, in The Hidden Connections, claims the positivist framework of social theory is patterned after classical physics. In fact, Auguste Comte, who introduced the term ‘sociology’, first called the scientific study of society ‘social physics’. One inheritance of positivism during the early decades of sociology was the focus on a narrow notion of ‘social causation’, which linked social theory conceptually to physics, rather than the life sciences. It is here that I feel Ikeda’s work lies. Emile Durkheim identified ‘social facts’, such as beliefs or practices, as the causes of social phenomena. Even though these social facts are clearly non-material (as is the case in the mass audience engagement with spectra [paris]) they can still be treated like material objects. Durkheim saw social facts as being caused by other social facts, in analogy to the operations of physical forces.

As human beings we are capable of two kinds of actions. Like all living things we engage in involuntary, unconscious activities, such as digesting food or circulating our blood. In addition, we engage in voluntary, intentional activities, and it is acting with intention and purpose that we experience human freedom. Ikeda seems to highlight the fallibility of this notion. By simply shining a blinding beam of white light the artist radically affected an entire city’s mindset, co-ordinating a network of component parts that offered a mass exploration in human communication. spectra [paris] highlights the complex dynamics and interdependence of human action. This is perhaps best seen as an allegory for the whole of Western society, in which, according to German philosopher Oswald Spengler, the actual goal will never be reached.

As Capra opines, meaning is essential to human beings. We continually need to make sense of our outer and inner worlds, find meaning in our environment and in our relationships with other human beings, and act according to that meaning. Ikeda’s work is so fascinating because it disrupts this framework. When thousands of Parisian’s flocked to spectra [paris] did they have a purpose or goal in mind other than fundamental intrigue? What would have happened had the lights suddenly turned off? Would collective mentality suddenly have broken down or would their journey have continued despite the end point being ever more unclear? 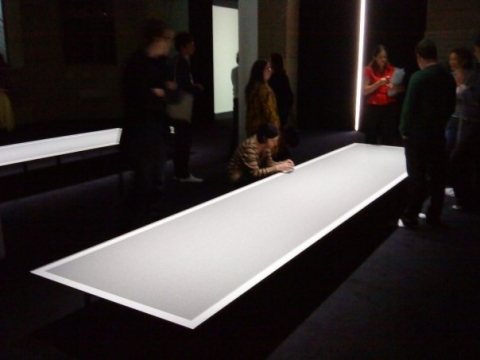