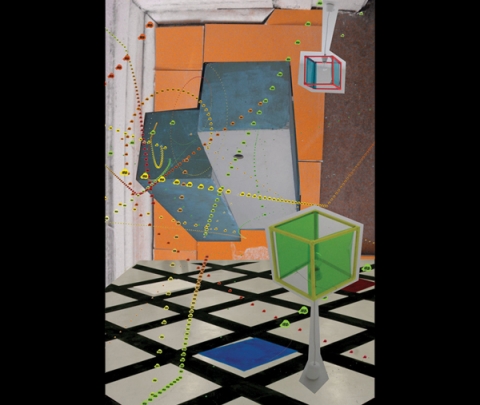 Starship Magazine was established in Berlin in 1998 by Hans-Christian Dany, Martin Ebner and Ariane Müller. The rationale behind the publication is based on the artists’ speculation that it will be produced to accompany the final one hundred years of mankind, with the last issue expected in 2098. Their self-imposed rules and regulations subject its contributors and producers to refrain from alcohol, cigarettes and drugs in order to meet this timeline, to use the magazine as a stimulus for longevity, to use its rationale to stay alive long enough to see it all be destroyed by a reasoning that depicts our society as uniformly unsustainable, comprehensively defective, wilfully flawed.

The artists behind the magazine are also responsible for numerous presentations, exhibitions, their own gallery space and cinema, a concert hall and publishing houses based in Berlin, Hamburg, London, Paris, Cairo and New York City underscoring a commitment to their philosophy, their rational of, as this shows attempts to establish, of the inconsistencies inherent in combining ideas about excess and sustainability. “Written on Spiders” hypothesizes, from a position, therefore of impossibility.

The show consists of a number of interlocking elements: editions of the back catalogue of the magazine displayed on a blanket, a framed large-scale sculptural cube enclosing a multiple edition text, illuminated by a green glowing light bulb, a series of prints papered to the walls, a tree branch decorated with silver foil, and a suite of framed drawings/collages. Silverman shares a space sometimes awkwardly with its store, the Look Boutique, so on occasion works in the show seems to merge with the for-sale items: limited edition clothing, books, publications, jewellery and music. This confusion of random interchanges between art and commerce may be deliberate but it serves to underline a sense of disquietingly uptight, edgy values evident throughout this show, throughout this space.

A set of questions are prominent in the show: what is the value of production and function? What relationship do we really have with our environment? What use is the city when the city is such a site of aggravation and flux? The posters papered onto the wall deliver statements, attempts to deliver answers with explanations on what to do if you live in a flood-risk area, statements on the deliberate censoring of images; random visual acts which explore histories of dissent, change, upheaval. The text multiple meanwhile gives us a fragment of a mingling of intangible narratives about love, computer desktops and characters, rain in times of drought, mental disease, the World Health Organization and calls to Keep Your Distance, obediently observed. The suite of drawings are similarly disengaged from linear movement, nervously drawn with fine ink lines and scratches, as if made by the spiders of the title.

The provisional sensibility of the show is reflected by the fresh occupation of the gallery in this building in Sutter Street in downtown San Francisco (it has moved from its original basement space across town). The work seems hurriedly constructed, easily dismantled, premature and hasty. And perhaps this is its true strength: if we are to consider notes on excess and sustainability, on impossibilities, failures and nervous actions what better way to achieve this than through its delicate membrane of fragmented transitory illuminations like the tiny green light bulb glowing pitifully and artificially against the punishing, giant summer Californian sunshine.