The eerie world of Mackie - a-n The Artists Information Company 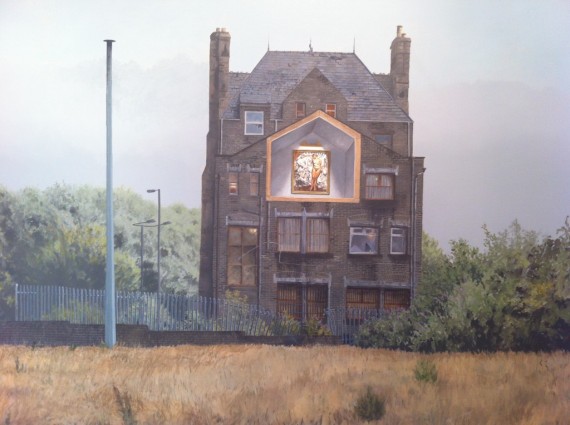 An alleged spat between Lucian Freud and Francis Bacon is the theme running through Mackie’s exhibition “You were shit in the 80s” currently on show at James Freeman Gallery.
However, rather than focusing on these alleged disagreements, the viewer feels drawn into a strange and eerie post apocalyptic world where derelict manor houses and abandoned caravans are populated by modern and contemporary art works.
Mackie claims that his paintings are playful and refer to the idea of the doll’s house. Yet they also feel ominous, transporting us into a post-nuclear not so distant future where all that remains are a few derelict ruins sheltering the works of Bacon, Freud, Hepworth and Emin, the last traces of our extinct civilisation. And this situation doesn’t seem so implausible since art has survived through the ages from Prehistoric times.

Thus, Mackie’s paintings allow strange dialogues between the past (in the form of the ruin), the present (contemporary art) and the future (a post nuclear world). Fragments extracted from their original context and brought together by the painting process develop unexpected correspondances and open up poetic dialogues reminiscent of T.S. Eliott’s Four Quartets: “Time present and time past, Are both perhaps present in time future, And time future contained in time past”. For example, a 1970s brutalist watchtower housing a Hockney painting (All by my own hand, part 1) might have the feel of a 1960s-70s sci-fi movie and a derelict manor housing a Freud nude (You were shit in the 80s) in its loft might remind of a victorian gothic novel. It is up to the viewer to immerse himself in Mackie’s paintings and let his imagination run free.

Mackie’s exhibition is nicely complemented by Corean artist Hyunjeong Lim’s solo exhibition “The figures by the sea” on lower ground floor whose practice revolves around drawing imaginary worlds rooted in memory and identity. Both exhibitions run until March 28 at James Freeman Gallery. (www.jamesfreemangallery.com).

I am an artist interested in memory, the archive and the cinematic. French and Italian art films of the 1960s (a form of collective archive), family Super 8 films (personal archive), and found photographs inform my painting practice. Writing about art is another part of it and provides further context. Originally from France, I am now London based and recently graduated from Wimbledon College of Art. I have exhibited in the UK and France and my work can be seen on my website www.antoniajacksonart.com