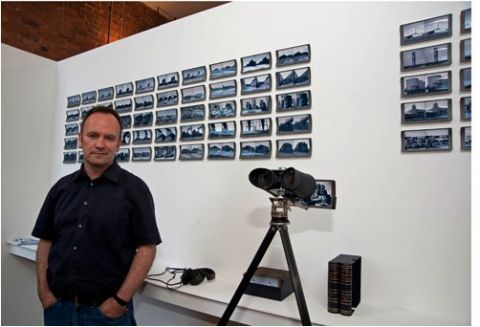 The Liverpool Art Prize, now in it’s fourth year is an annual exhibition and award for artists from or based in the Liverpool City Region, founded by Ian and Minako Jackson of Artinliverpool.com. Liverpool has a huge artistic community so it’s great to see the prize gaining momentum each year. This year the exhibition is held in Metal at Edge Hill Station.

Emily Speed’s installation consists of small-scale sculptures of a fist and rocks, a drawing and a towering wooden construction resembling a twitcher’s hut or POW camp watchtower. The installation forms a diagonal across the room, suggesting a boundary or power hierarchy. The watchtower looms heavily, oversized in its space, keeping track, closely, of everything beneath it. Or is it? Is the watchtower actually empty or abandoned and the things beneath escaping? Being familiar with Emily Speed’s book works it was interesting to see a strong architectural drawing based interrelation between them and this installation.

James Quin [People’s Choice Award winner] displays a series of small contemporary German-type paintings and drawings. The work has been made in response to Metal and the station buildings it occupies. Some history, some fact and some makebelieve is used to create lusciously painted work on canvas that works as a storytelling device. In some parts the story is less evident but the image strong. The images are dark, macabre but romantic, reminiscent of a grandparent’s story. There is something very intimate about the work, helped by the oval format of some of the paintings.

David Jacques’s [winner] work appears fairly straightforward. A series of 100 stereoscopic images of two industrial sites in Liverpool, Canada Dock and the former Kirkby Industrial Estate. However, Jacque’s multi-layered work isn’t as straightforward as it first appears. Part fact, part fiction, with accompanying texts and narration. The narration is based on a fictional character that returns to his former workplace to take photographs. It’s easy to get lost in the work and the history it depicts. Jacques is also a shortlisted artist for the Northern Art Prize.

I work as an artist, lecturer and publisher. In 2005 I set up CafÃ© Royal Books, specialising in short run artists editions. http://www.craigatkinson.co.uk http://www.caferoyalbooks.com