The Meaning of Style - a-n The Artists Information Company 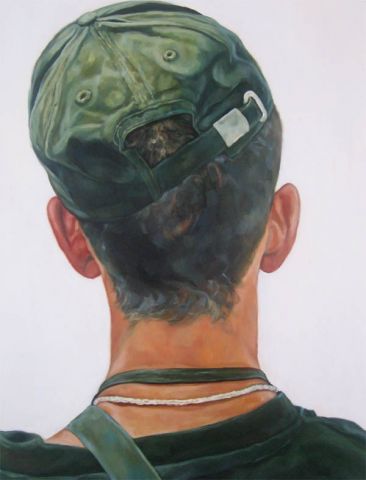 After watching the Channel 4 Series ‘Tower Block of Commons’, raising issues of gun and gang crime and the stereotypes that tower block residences are unfairly titled with, this exhibition at the NAE seemed fairly apt. ‘The Meaning of Style’ is an exhibition aiming to voice “young African Caribbean men [who] have often been portrayed as low achievers and perpetrators of crime in British society”. The exhibition questions these stereotypes through the artists varied methods and asks that with the rise of US president Barak Obama, will these stereotypes be changed forever?

Immediately catching my eye were Vanley Burke’s numerous photograph. They presented the change of times from the 1970s to the present day, and the vast traditions and pressures that black families have been facing. The 2009 colour photographs were CSI style – eerie blood spots on pavements and the yellow tent style plastic numbers used to photograph scenes of crime. Burke also showed a series of modern funeral photographs with the decadent white coffins, horse drawn carriages and white lilies decorating the new age churches. The congregations of families around a graveside, pouring Moet and Chandon champagne into a grave as a last offering to the deceased, was a startling contrast and times of change to the black and white image that were presented above of a 1970s Afro-Caribbean protest rally. The new versus old above and below each other seemed a miss match of jumbled images, with no exact relation to the image above except the same photographer. But alone, it would have been a documentary of modern day gun crime and their families, rather than ‘art’ so technically they had to work well together. Housed in an art gallery presented something different to the images you often see plastered over BBC news. They make you as the viewer question the families left behind from these crimes, not just merely the bare facts around the investigations.

Whilst viewing these sobering photographs, load reggae music was playing. Unable to see where it came from, to me it felt very unsympathetic to the harsh reality that each artist was attempting to portray. Moving further round the gallery to the corner, archive footage, 2 hours in full, was played on a monitor where the music was coming from. I sadly gave little time to this piece as it seemed uninviting. More like a police office in the midst of an investigation were newspaper cuttings plaster haphazardly stuck to the walls, it all seemed a bit over the top. Hard hitting headlines such as the publicity crazed Stephen Lawrence case were pushed at me. In an art environment, I feel that it should have been left more up to the individual to think about what they felt from the exhibition. It was not necessary to view the newspaper headlines we are constantly faced with as art is about presenting something in a new and profound way and Burke cleverly did, but subtly.

A relief rushed across me that there was more ‘art’ and this came in the shape of Barbara Walker’s epic paintings and drawings. Epic in style, but also epic in skill, these beautiful images showed fashion hairstyles and clothes that are stereotypical to the black community, but interestingly the focus was backs of heads. Walker gave the pencil and oil paintings names such as ‘Subject K’ and ‘Construct 1’ which seemed a very impersonal title to give to an image that had clearly become personal to the artist as time and energy was evidently spent delicately constructing then. To me, the clinical titles worked well with the back of head shots as it did question the origins of the exhibition – the presumptions we think when we see dreadlocks and Sean Jean hoodies. On a separate wall were a continuation of Walker’s images, but one, a face on pencil drawing, did however have title that was simply ‘Sol’. This for me expressed the whole pinnacle of the exhibition of how people in the black community face the publicity of gang and gun crime, and that they can never overcome the stereotypes of people who are actually the perpetrators. Walker spoke volumes of this, of how a face isn’t just everything as there is a person behind that stereotyped image. Perhaps a corny line to speak, but it echoed truth.

The exhibition didn’t completely question the stereotypes, but to me, it was more about the issues surrounding many communities in England, that of gun crime. It spoke volumes of the families faced with the consequences of these horrendous crimes and how many people are prejudged for being perpetrators in these issues, when they are merely innocents caught in the crossfire. ‘Meaning of Style’ was a sobering realisation of something we overlooked in headlines, but that is far too common in many places across the UK, and this includes Nottingham.