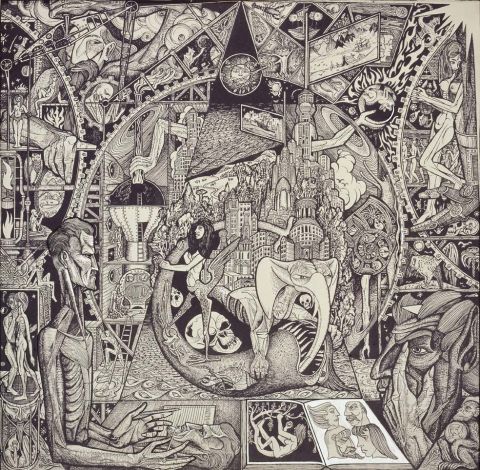 “Reason, or the ratio of all we have already known, is not the same that it shall be when we know more.”

William Blake – There Is No Natural Religion (1788)

As a title The Profane Myth couples two seemingly contradictory ideas: the myth; a sacred, literary remnant of primordial civilizations and their religious or spiritual belief systems and the profane; a secular irreverence or debasement of religion or the sacred (originating from the Latin profānus ‘outside the temple, not sacred’1. and the Medieval prophānus ‘desecrated’)2.. This apparent oxymoron aptly obfuscates any quick or easy preconceptions of a show which is itself densely layered and based on a plethora of different perspectives and ideologies from contemporary western theology to traditional eastern philosophy.

One of the premises of the show, like the canons of Zen Buddhism and intentions of the Ko’an question i.e. “…to break through these metaphors until we can’t resort to another metaphor…”3., is to explore whether art can be a means to find new ways of seeing, thinking and knowing, as an endeavour towards a an understanding which extends beyond existing paradigms of thought and language (logic, science and even art itself)4 disciplines which are themselves inherently influenced by the legacy of mythology, religion and capitalism. The artists in the show have been painstakingly selected for their practices which explore various threads of this enquiry; as they pick their own ways through (and make connections between) the multitude of information and systems of belief, between the divine and the mundane, that we are exposed to in our daily lives.

The distillation of multifarious forms and motifs is central to the complex and wondrous works of Alasdair Gray from the lineage of mythology, to 20th Century Literature, and experiences living and growing up in Glasgow. In his disorientating, dystopian novel Lanark (1981),Gray describes a world bereft of receptivity, art and love where people are unable to live creatively and engage with the world and people around them. As a consequence, individuals live under the constant threat of being consumed by the machinations of the system itself, their life force literally channelled to power the city generators5.. In the context of The Profane Myth Gray’s illustrations from Lanark serve not only to question the artists role in society, emphasising the need to engage rather than to escape, but also perhaps to illustrate the importance of traversing both the interior and exterior worlds (as the Shaman once did through the Axis Mundi – the umbilical chord connecting heaven and earth) and to assimilate the richness of influences and kaleidoscopic perspectives from both these places.

Whereas the plethora of influences are folded into Gray’s oeuvre, feeding a larger matrixical reading of the work, Steven Claydon’s coarse, phantasmagoric film The Ancient Set presents an uncomfortable, artificially colourful melee of images from popular conceptions (or misconceptions) of history. Classical Grecian busts and contemporary scenes of historical re-enactments flicker and break up into a pixelated, schizophrenic frenzy, accompanied by a dissonant electronic score: “…designed to be played on replica Roman instruments through a slightly outmoded synthesizer…”6. The Ancient Set deliberately erodes outmoded interpretations of history as a single, linear narrative and instead confronts the viewer with an anarchic, fragmented version of atemporality. In Claydon’s perhaps an alternative interpretation of the concept of The Profane Myth can be found: The profanity of the contemporary myth (and of all myths) when they are essentially, inextricably inaccurate, dead matter, endlessly re-appropriated, glorified and re-absorbed through the images we are confronted by every day.

Installed in the library of The Mining Institute, Adam Chodzko’s exquisite custom built kayak Ghost traverses the oral history(s) of the boat both as a highly resonant motif and as an ancient utilitarian object; from the mythological ferrymen of Hades who used the vessel to convey the souls of the dead across the River Styx, to its practical application during the 19th Century in carrying the bodies of deceased prisoners, ferryed from ships moored at Swale, Queensborough, to their burial site on Deadman’s Island. Chodzko documented this last journey which he took in Ghost in 2010. Shot from the perspective of the passenger this film,

along with other journeys along the River Tyne, it is also installed in the show thereby continuing the endless permutations and transformations of the mythical motif of the kayak.

The decision to take the show into a ‘real’ environment i.e. not the hermetic, artificial white cube gallery which exists at a remove from every day life but a historic, culturally loaded space, resonates with Alasdair Gray’s appeal for art to engage with the real world outside. The relationship between the works exhibited in The Profane Myth and the Victorian context in which they are shown (Newcastle’s Literary and Philosophical Society and The Mining Institute) brings the relationship of these locations in the dissemination and advancement of knowledge and culture into the spotlight 7.. Whilst the Society represented a forward thinking and liberal enterprise even from it’s establishment in 1793 – admitting the first women members in 1804 and consistently promoting technological innovations8. – one can’t help but be reminded, under the Victorian awnings, amongst reams of leather-bound and gilded books, of the inherent social inequalities at the time of it’s founding both locally and throughout the wider British Empire.

The impact of The Profane Myth is not that of any single conclusion or overriding interpretation; the show poses as many questions and possibilities for contemplation as it hints at answers. The narrative of the show, if there is any one narrative, is as fluid as the myth itself; passed through the ages, endlessly reworked and reinterpreted with every individual who encounters it and the infinite permutations it undergoes; from the a temporal space at the origin of myths to the present. From the gaudy and everyday experience of total visuality to the silence and profundity of nothingness, The Profane Myth is a powerful demonstration of the potential of art to accommodate the profane and the mythological, and to go beyond them.

Iris Priest is an artist and writer based at The NewBridge Project in Newcastle upon Tyne where she is also Editor of the arts magazine CANNED. Iris has written extensively for artists and arts organisations throughout the region including Chance Finds Us - a Turning Point North East supported project exploring the various intellectual, philosophical and art historical connectionsÂ developing between a group of eight artists. She is also a contributor to a number of national magazines and journals including Corridor8, Artists Newsletter and this is tomorrow.

Iris was recently awarded the AA2A artist in residence at Northumbria University (2011-2012) and her visual art has been featured in both Frieze Magazine and Art Review.Â