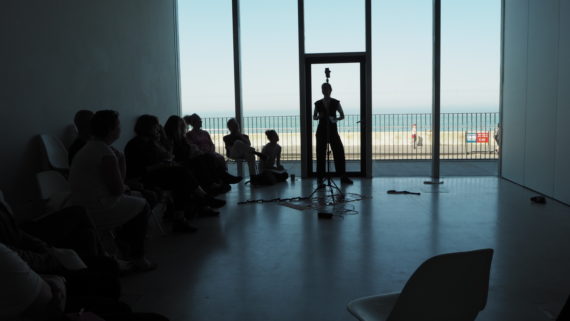 Salons of the same quality as we witnessed on 20th April 2018 in Margate are the reason why these gatherings of restless creative minds generate so much energy and collective knowledge.

Two pieces by young artists Lilian Nejatpour and Camilla Bliss were installed in one of the downstairs galleries at Turner Contemporary. The members of the salon panel, organisers Threads Kent, curious public members and visitors as well as artists themselves circled around the works prior to the start of the event, examining them from up close.

Lilian presented a new piece which was in its intermediate stage – the artist planned to extend it into a performance at a later stage. Her installation consisted of a mobile phone mounted on a stand and playing wedding videos which captured dancing Iranian men. A latex ‘carpet’ with Persian designs, flesh-coloured shapes in clay, fake fingernails and a plait of dark hair were placed nearby on the floor.

The artist then talked about her research on chorophobia which is on the rise in Iran and the wider Middle East. Men are being persecuted for dancing in the public or at social events because their movement may look ‘feminine’, thus breaking down the strict male and female code the country is used to. Lilian explained that there is a perceived pressure coming from the West to define masculine and feminine behaviour/performance and impose clear gender norms (even if here in the West, the body and gender norms are being gradually eroded). The long hair, nails and latex surrounding the video functioned as markers of the female body, perhaps the artist’s, illustrating the perceived danger of dissolving gender binaries.

The panelists (Benjamin Sebastian, Liv Pennington and Clare Smith)were immediately drawn to Lilian’s work and posed questions about its composition, surrounding narratives and future additions. What would happen if the installation addressed more forms of oppression, such as banned texts or fabrics? How could the work further incorporate the artist body as well as the absent bodies of the dancing men? How could another layer, a kind of paratext, be embedded into this? There was a generous conversation between the artist and the panelists whose role was to share their experience with an emerging practitioner and prompt her to identify other potentialities and areas of interest in her work.

The second presentation was delivered by Camilla Bliss who introduced her piece of five tall spearheads with exuberant colours and patterns, each representing a pioneering female figure. MP Lynne Featherstone who designed the same sex marriage legislation, physicist Marie Curie, fashion designer Vivienne Westwood, the artist’s grandmother and her sister provided identities to Camilla’s totemic characters. They were personified through symbols and attributes adorning their surface, often simple abstract shapes in repetitious formations or, in case of Vivienne Westwood, her fiery orange hair.

The artist touched upon the contrast between the phallic nature of the pieces and their soft, bright textures resonating with a more feminist methodology. The panelists proceeded to raise useful questions, this time about arranging and lighting the pieces, conjuring up possible scenarios including an external forest of empowered and empowering figures. Maybe a link to the Terracotta Army but as a more peaceful assembly? The artist benefited from the ideas proposed by the panel, however, she also expressed her desire to preserve a level of openness of her installation and not clip its range of meanings with any overarching associations.

Through Lilian’s and Camilla’s works and the conversation that they inspired, we spent an afternoon immersed in topical debate on the body, normativity, language and oppression. Both panelists and visitors could participate by making observations and raising questions which resulted in an atmosphere conducive to sharing opinions, listening to each other and considering multiple points of entry into each piece.

The latter was brilliantly exemplified by a revelation made by one of the Threads Kent curators – in their application forms, the artists invited to today’s salon had talked about a similar preoccupation with technology, using it and commenting on it in relation to human touch and movement. However, in the course of the afternoon, what emerged through collective thinking was another significant strand in their practice, the expressivity and mutability of gender, the transgression of boundaries and a kind of celebration of the sensuous.

For more writing by Miroslava Kotuličová, head to