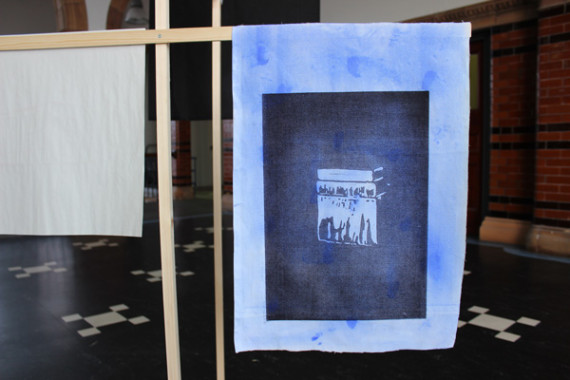 The Nan Tait Centre is a typically grand Victorian building within the Barrow-in-Furness town centre. Purpose built as a Technical College to feed the town’s shipbuilding industry it is surrounded on all sides by very particular local architecture including ammunition factories, tenement housing, office blocks, submarine sheds and a cluster of rickety-looking fishing huts that weather the coastal storms while high street shops, discount stores and fast food outlets come and go. Even this grade ii listed building was itself rescued from planned demolition to house both County Council offices and the proactive arts organisation Art Gene in a rather complicated alliance.

Within the Centre, Art Gene run an exhibition programme called U-Hang, which places contemporary art installations into its public areas. Recently, an unfortunate tension has grown between unseen regulators within the council and the artists who long ago gave themselves permission to do this. In the most recent incident, an artwork simply reading ‘FUN’ in bright, capital letters was silently removed from a student exhibition because of a perceived potential to offend.

The building’s users themselves, mostly busy employees or public attending council business, have grown accustomed to the sight of artworks being installed and information panels tacked to walls – even willingly participating in interactive artworks, though seldom acknowledging that any artwork is intended principally for their benefit.

Amidst this not uncomplicated context, and with recent storms still bullying the whole Cumbrian region, U-Hang artist Ally Wallace seemed to wander briefly through the building and somehow leave behind him an installation not just pertinent but almost an antidote to its problems. Travelogue is as graceful, liberated and timeless as its context isn’t.

On one wall is a series of twenty-five high-contrast drawings (most in a grid, with three placed like Christmas cards on the windowsill). Wallace made these sketches during his research visit to Barrow in November. Initially planning to record the interior architecture, he describes being shown the exhibition space with its amber brick walls, dark patterned floor and stark windows which provide light but no view and being filled with a visceral desire to escape to sketch on the streets outside instead.

Travelogue tells of this day of drawing. The sketches are simplified almost to the point of symbols. Without prejudice they describe details from the varied Barrow townscape with an elaborate stone doorway getting the same reductive treatment as an advertising board. Such neutrality charts the artist’s own movements too, that he changed sketchpad for the final three and the places he sought shelter from the perpetually blustery wind.

The largest element in the exhibition is a free-standing floor-based sculpture consisting of a thin wooden scaffold proffering delicate drawings (and prints) into space. With each plane different in surface and medium and showing off a large-scale development of one of the sketches on the wall, it’s a truly joyful sight. Picture a colour scheme like worn t-shirts with simple, honest mark-making that captures a studio artist truly enjoying working his variety of surfaces. Here too, the non-precious and unremarkable (such as a sheet of newsprint) is elevated and its innate qualities become glorious.

Ally Wallace has produced a sculpture as translucent and light as rigging, with a framework perfectly echoing the vertical and horizontal lines of both the interior space and the exterior architecture it portrays. But drawings do not have to adhere to the rules of physics and lines wobble and paint splotches and any ghosts left over from the days of the Technical College can at last snap their set squares and get dancing.

In place of an information panel, the artist has left a hand-written description of his day’s visit to Barrow in felt tip pen, rather like one might prop a note on a colleague’s computer. It’s unconventional but in no way irreverent. In it he lists the streets he visited to draw – something that took hours on Google Earth to find out accurately. As the wooden frame of his sculpture supports his drawings with a kind of frank and naïve grace, sincerity is the structure underpinning the whole of Travelogue, permitting this cheeky freedom from the onerous building, and from classicism and artistic conventions in a way that sings out to its cautious audience to join in too. Perhaps it is ok to have FUN in the Nan Tait Centre after all. 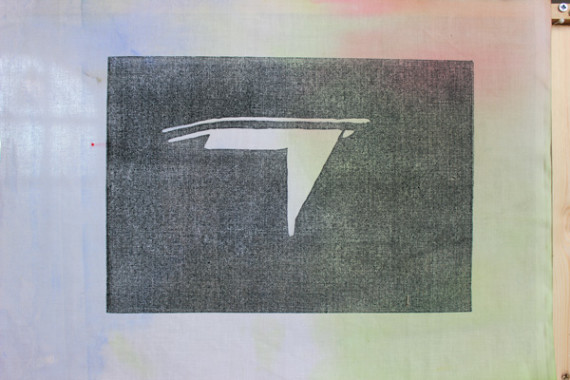