Under That Cloud - a-n The Artists Information Company 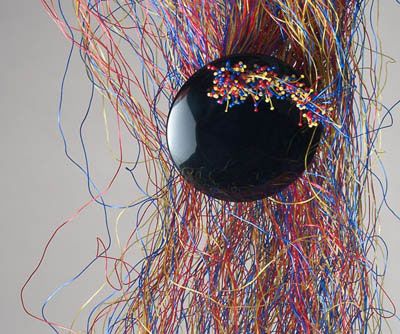 The Icelandic ash cloud of 2010 brought many parts of the world to a halt, and showed international societies just how fragile our technological networks really are. Despite unbelievably advanced machinery and the ease of travel in our modern world, nature usually always wins. For those stranded in foreign destinations across the globe, the easy option may have been to panic, and spend what was essentially an extended holiday just trying to find a way home. The new exhibition Under That Cloud at Manchester Art Gallery showcases work from 18 international artists, all of which were stranded in Mexico City during the air travel standstill. Fascinatingly, they have all chosen jewellery as a way to manifest their responses to the crisis, as well as their experiences of Mexico and its culture.

The conflict between nature and human technology is a perplexing one. Many of those prevented from flying due to the ash cloud simply put faith in technology to let them know when it was safe to travel again, and get to where they needed to be. Others turned to God. The feeling was that if he had caused this then he was surely the one to rectify it. Jorge Manilla’s necklaces entitled Two Possibilities, embody his religious response to the predicament. As a Mexican artist stranded in Mexico, he did not feel too alarmed by the situation, but instead tried to imagine how others were feeling. Had he been far from home, Manilla said he would have turned to his religion to return him safely; the crucifix on one of his necklaces symbolises this. This artist has used predominantly black for his pieces, as he felt this implied both the negative and doubtful nature of the situation, but also how from the darkness often comes new beginnings.

Colour is definitely a prominent theme in this exhibition. Many of the artists have chosen to use grey, black and silver to represent the mechanical nature of the crisis. Jurgen Eickhoff’s steel and silver abstract mesh brooches signify the conflict between home and far away, and the mass of networks in-between. He feels that “the local has global effects,” and that one small breakdown in a network can bring all corners of the world to a standstill. Disasters such as the ash cloud can often show us the sheer fragility of networking, and how nature can overwhelm even the most complex technology, bringing back a primitive feeling of uncertainty.

While it may have been easy to feel trapped by the upheaval, many saw the ash cloud crisis as an opportunity to experience more of the place they were stuck in, and to absorb the culture further. This is certainly true of many artists in this exhibition. Karin Seufert’s necklace and brooches, made of melted plastic, embody the vivid and colourful personality of Mexico City. She tried to create pieces which for her represented the heat of the sun, the noisy streets, colourful surroundings and exhausting chaos of Mexico’s culture. The deep purple of Jiro Kamata’s Arboresque brooch shows how this artist was also inspired by the rich colours and particularly the architecture of the city. Nedda El-Asmar’s piece Structured Coloured Chaos is a beautifully quirky reaction to her experiences. This artist has used many colourful clothes lines, which she bought while in Mexico, as a representation of how she experienced the environmental qualities and vibrant nature of the place.

Andrea Wagner’s brooches entitled When Skies Were Silent hope to symbolise how society can take for granted the ease of transport in modern life, and this is really the underlying message of this entire exhibition. The artist said, while stuck in Mexico City, she took time to appreciate the “rare beauty of the silent skies,” while air travel was briefly halted. The collection of works in Under That Cloud are an intriguing insight into how people’s reactions can differ so greatly, and how an unexpected breakdown in our global networks can make us take time to consider the vulnerability of technology. Culture is integral to this exhibition, whether it is regarding the vibrant societies of Mexico, or our worldwide cultural dependence on travel and communicative networks. In creating jewellery, which is a beautiful thing, the pieces in this exhibition have managed to extract something positive from the dark cloud, whilst also engaging the viewer with how it felt to be at the heart of such an exasperating situation.