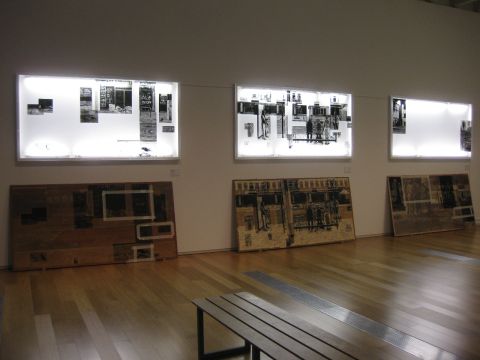 Named as Britain’s number-one ‘clone town’ by the New Economics Foundation in 2005, Exeter is the perfect starting point for Volkhardt Müller’s examination of contemporary British life. Dominated by chain stores, the city’s high street looks identical to many across Britain.

‘Any High Street’ takes as its starting point a series of video recordings. With a camera attached to his bicycle, Müller travelled the full length of Exeter’s main shopping street at different times of the day. At noon, he shows us a town busy with shoppers. At night it’s a site of drunkenness and disorder. And, in the early hours of the morning, a deserted place where pigeons and crows feast on rubbish.

He’s drawing our attention to the linearity. The heart of Exeter is not a town square, a place for local people to wander, gather, hang about or meet. It’s a space that forces a sequence of encounters with corporate retailers. Pedestrians progress from Next to Gap, Greggs to Costa, pub to club, consuming as they go. Towards either end of the street, we see empty shops, struggling independents and a few takeaways. As the opportunities for consumption diminish, Müller turns his bike around and heads back for another foray.

Elements of these films – along with observational drawings made at the scene – have been incorporated into three large-scale woodcuts: Morning, Noon and Night (2012). The giant plywood blocks are propped below light boxes on which small segments of the finished prints are displayed. These are the parts that have been ‘commissioned’ by the public from the artist, a few square centimetres at a time. They are shown alongside Witness Box, an interactive installation of 12 children’s wind-up music boxes showing smaller linocut prints on rotating rolls.

The use of figurative imagery and the traditional craft skills of woodcut printing are deft tactics to engage a local museum audience, but they also function as a way of connecting historic with contemporary themes. The museum, which encourages us to ponder relics of the past, now overlaps with the living, breathing city just outside its doors. ‘Any High Street’ offers citizens of Exeter – and other cities like it – a mirror in which to examine themselves. It seems the ‘nation of shopkeepers’ has become a nation of shoppers.

By using sequential scenes of everyday life to critique social behaviour, there’s a nod to Hogarth. Looking at the prints alongside other elements of the show, it’s possible to detect a Devon variation of A Rake’s Progress, which takes the viewer from images of wealth and privilege to drunkenness on the street, and despair in the cells of the courthouse.

Cell (2009) is a room-sized installation of 10 intaglio prints on kozo paper taken directly from the graffiti-scored walls of a holding cell in Exeter’s former crown court. Arranged around a fluorescent light in their original configuration, the walls – now paper-thin and translucent – allow onlookers to read the messages left by prisoners in transit. Eavesdropping on a conversation between desperate people (messages of bravado such as “Charlie 7yrs A Truro Psycho to the max” were surely meant for other inmates), the work combines the technical virtuosity of large-plate printing with a fascinating demonstration of its indexical nature.

Meanwhile, Pastoral II (2012) is a projection that documents three drawings scratched into the walls of another holding cell – this time by Müller in 2009. Based on 18th century engravings, they depict scenes of well-ordered nature, but are shown through fragmented, hand-held video footage. The work reveals the pastoral ideal as a construct. It also highlights our inability to see ‘the bigger picture’ when we are confined, whether literally (as a prisoner) or metaphorically (as a citizen-consumer).

This exhibition makes much of the contrast between the unique and the duplicated (or cloned). We see one-off printing plates beside the multiples made from them. Local citizens and locations are depicted within the frame of a mass-produced plastic toy, and a particular high street is held up for comparison with its generic cousins across Britain.

Müller also makes persistent use of fragmentation as a device, which is presented as a positive as well as a negative. The process by which gallery visitors are able to buy small segments of the large-scale prints Morning, Noon and Night is more than an act of audience engagement or creative fund-raising. It allows Exeter’s citizens to repossess – if only symbolically – streets that are rapidly being transferred from public to private hands under the guise of partnership and regeneration.

Work from ‘Any High Street’ can also be seen at Taunton Brewhouse 6 October to 17 November 2012.