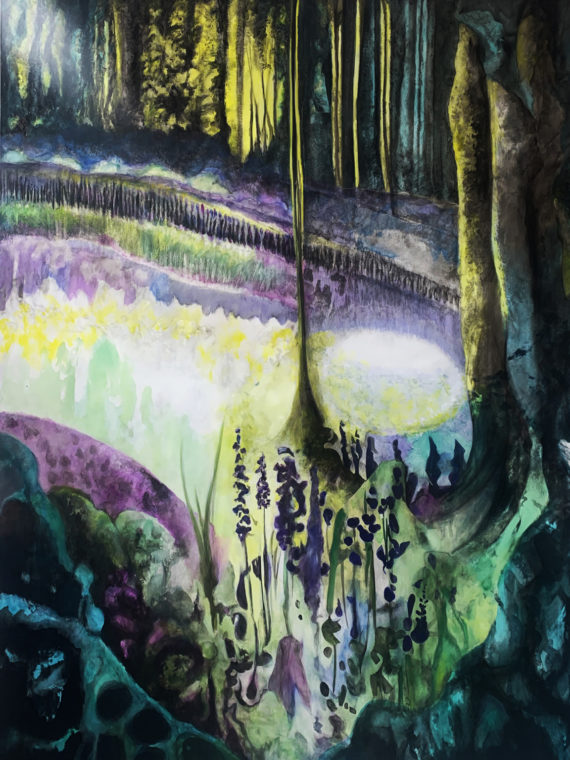 What is a dream? For definition Dr Johnson seemed to have it covered as long ago as 1755: “A phantasm of sleep; the thoughts of a sleeping man” his dictionary specifies, adding what he considers the Shakespearean take: “An idle fancy; a wild conceit”.

For artists, dreams can be more real than phantasms or sleeping thoughts, and Shakespeare built a whole play around his concept of idle fancy or wild conceit: The Tempest.

“We are such stuff as dreams are made on”, Prospero tells the audience in the play that the curator of this exhibition, Vivienne Roberts, founder and director of Aleph Contemporary, has carried with her since she first saw it aged 15. Looking at the work of the ten artists she wanted to show, it was this quote, and the play, that came to mind: a visual series of interpretations taking, as dreams do, their references from the very different experiences, memories and imaginations of these painters in Prospero’s theme. She has chosen a venue that has its own share of dreams – The Cello Factory at Waterloo with its glorious natural light and soaring beams is the perfect venue in which to suspend reality for a while.

The artists have ranged widely in their research, from 20th-century European philosophy to Hindu myths of the Mahabarata to Chinese Taoism. Varying in age from their 20s to their 50s Roberts has found ten utterly different painters each with their unique rendering of dreams.

The most ethereal work is Helen Brough’s who paints with oils on aluminium, giving her sure line an extra strength. There is something Lewis Carroll-like about her pieces, and if ever there was a slithy tove or a tulgey wood they are here, and her use of light, colour and line to answer her vision of springtime glades makes for timeless reverie. 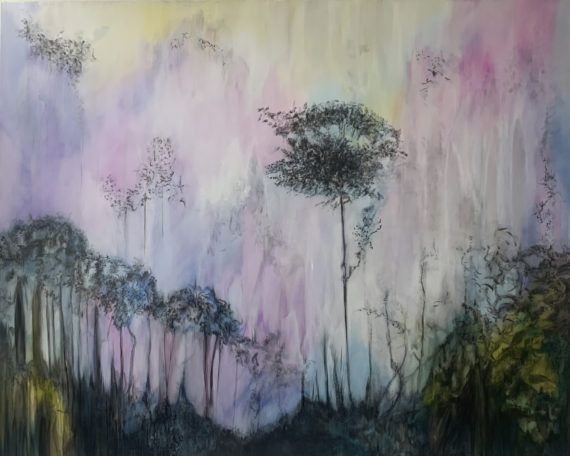 Oliver Dorrell started his adult life as an anthropologist before becoming a painter and went to India where he was inspired by Indian myth and miniature painting. During a residency in Tirupati in the south, he found a dual influence in the flash floods and fires in the news and the mythology he was reading, tales that are always a dreamlike step away from reality. The two oils on canvas here are a blend of Indian miniature painting and Western art history which, in the miniaturist tradition, are almost limned in his precise shaping of figures. 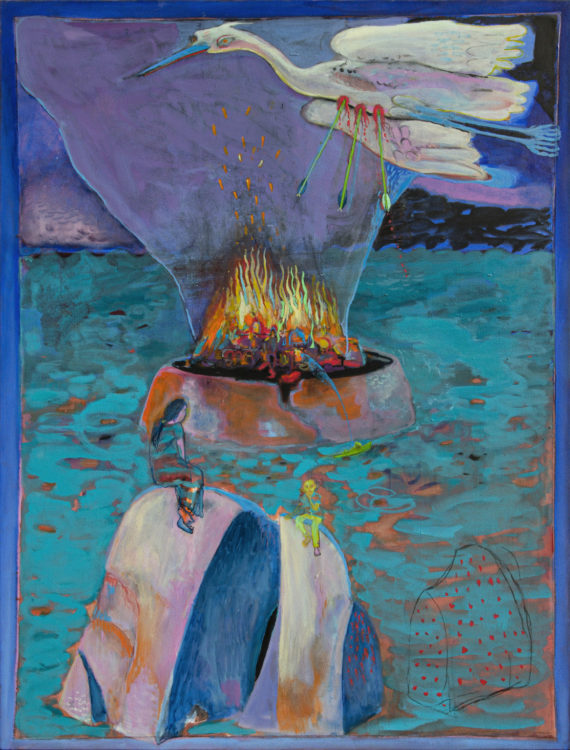 If dreams are anything they are surreal, something that Paul Newman has used for the narrative of his Green Fly, a finely drawn oil of a parlour loaded with domesticity – pictures on the wall, a groaning bookcase, table lamps, a sideboard and leaving the scene through an open door is a figure that seems to be in some kind of metamorphosis, a four legged creature whose upper body is concealed by a lime-coloured shroud or mantle which is developing fly’s wings. The enigma of the narrative is the puzzle of youth – what form will our young dreams take in reality as we go into the world alone? 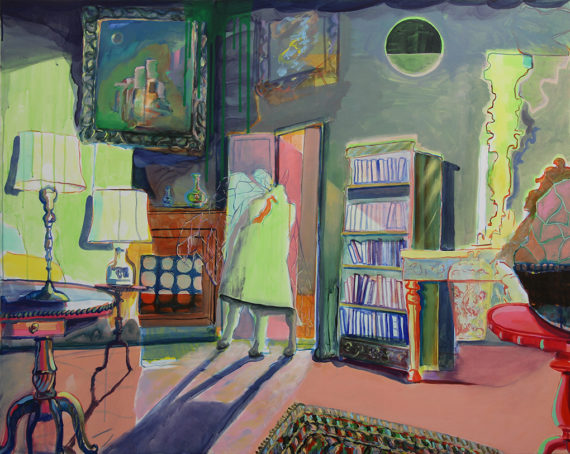 Spanish-born Jaime Valtierra lives and works in London. His painting, The Temptation To Exist, depicts rickety shelves with a large cheese and big masks which small figures are reaching for to put over their heads. His The Dream Of The Artist Against The Spectre Of Time has the artist lolling against a tree dreaming of a garden in bloom, while a world of hubris and political mischief threatens his peace of mind with an axe, and his third image has a unicorn, a symbol of imminence and freedom, peering in through a window. 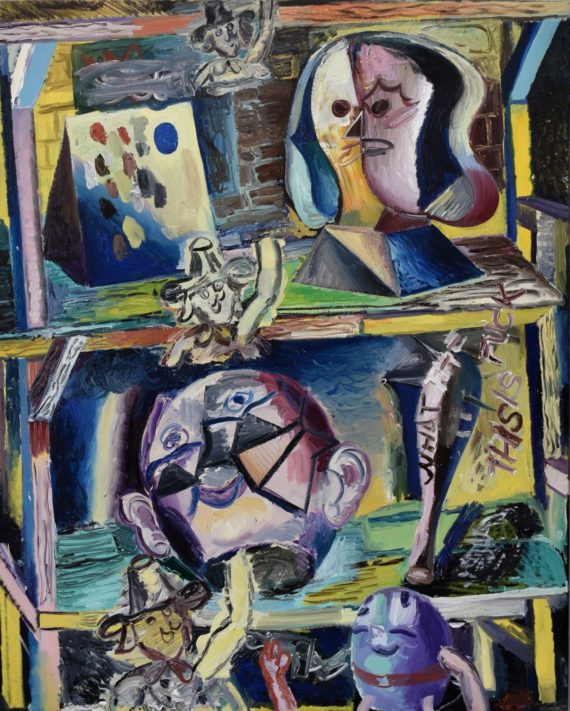 Two of Alice Macdonald’s canvases in the show are portraits that gaze into the sitters’ inner lives, one is a head perfectly shaped but with blue eyes of deep anxiety and a deep red mouth pursed in apprehension, a lock of hair coming astray, while the other is a three-quarter length figure of a woman to all outward appearances relaxed, arms loosely resting on a chair’s arms, but her eyes are wide with what looks very close to terror. Her third painting is quite different: a series of random windows captured during lockdown, with characters in each frame performing private things – surreptitiously smoking, making love, sticking an NHS rainbow on the glass. 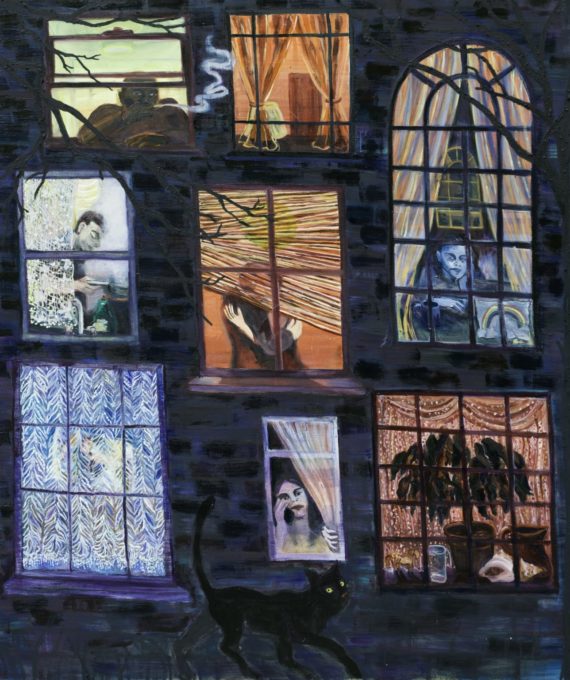 Fiona G Roberts’s pre-pubescent children have a truly mystic quality, reverse-painted onto Perspex to give an even more ethereal effect, sometimes with rouged cheeks on their green- sheened skin, sometimes with spots on their noses reminding one of clowns and Picasso’s pierrots, looking lost but reassured by each other’s grasp. 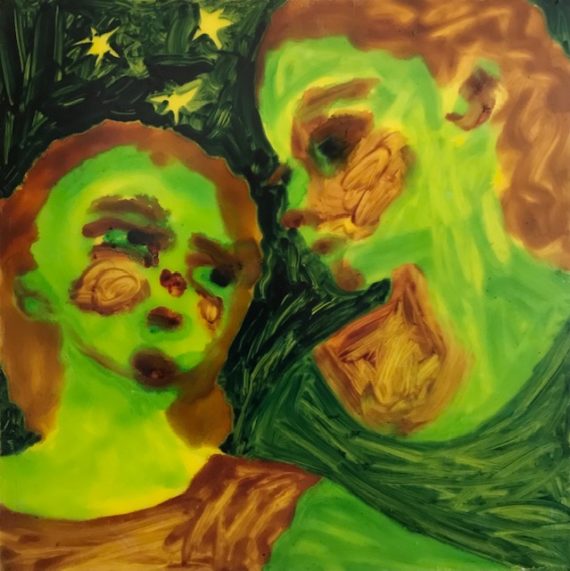 The closest that this exhibition comes to abstract painting is Joe Packer’s group of organic-looking shapes, leaves perhaps or petals, intuitively painted, he says, but it seems seen as though viewed through a microscope’s lens. Artists look at nature and at things to reveal what is hidden. Paul Klee, for example, was more interested in the sap in the leaf than in the finished product. He said: “Becoming is superior to being”. 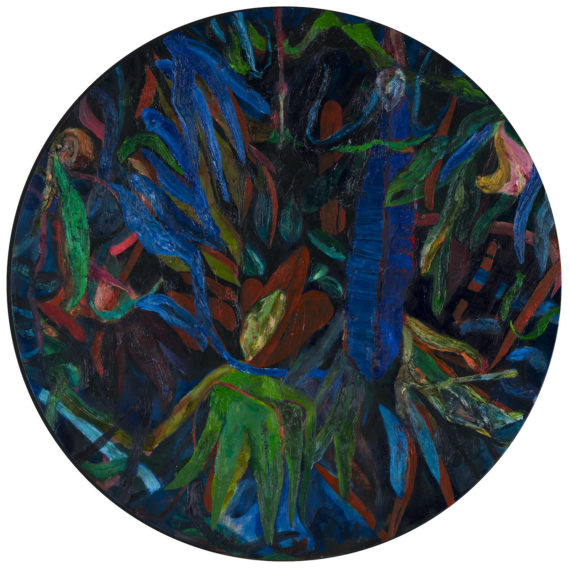 Archie Franks takes us to the dreamland of funfairs where nightmares never seem far away, and in a rapidly painted hotdog, the gouts of mustard appear like teeth about to devour the devourer, while in another of his contributions serried ranks of beer pumps stand at the ready – waiting to serve or threatening to charge? 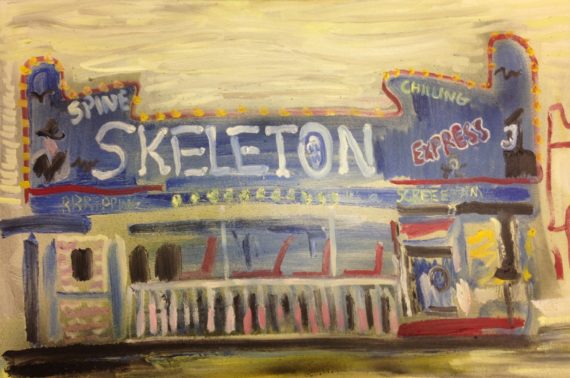 On the seedier side of street life, Ben Westley-Clarke’s night-time narratives could be portraying street crime being committed or Hopperesque night people going about their lawful nocturnal activities. 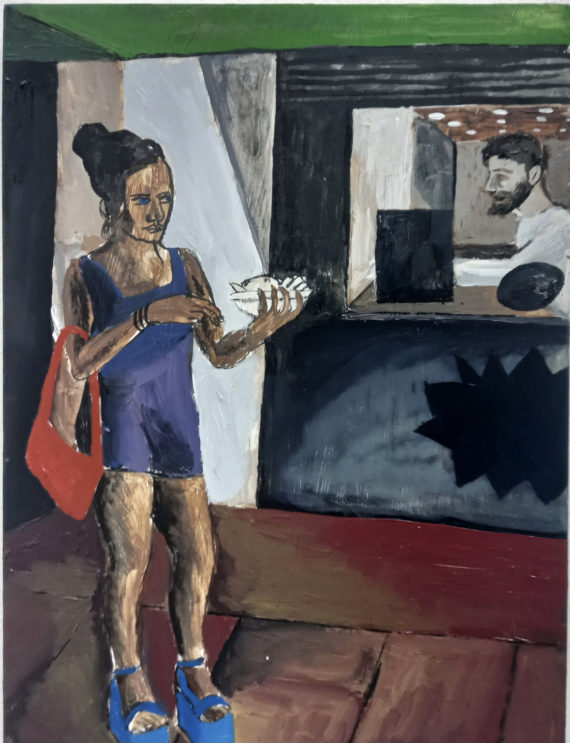 Liorah Tchiprout, still in her 20s, builds dolls before painting their portraits, so that her figures have a disturbingly marionette-like appearance, one pace away from being human.

The business of making art is immensely complicated and it usually is a very long time before the artist takes off, but when the muse comes something deeply valuable happens and sometimes, touched by the spiritual, they are carried to another place, perhaps even to Prospero’s dream world.

“The solemn temples, the great globe itself, Yea, all which it inherit, shall dissolve, And, like this insubstantial pageant faded, Leave not a rack behind. We are such stuff As dreams are made on; and our little life Is rounded with a sleep.” 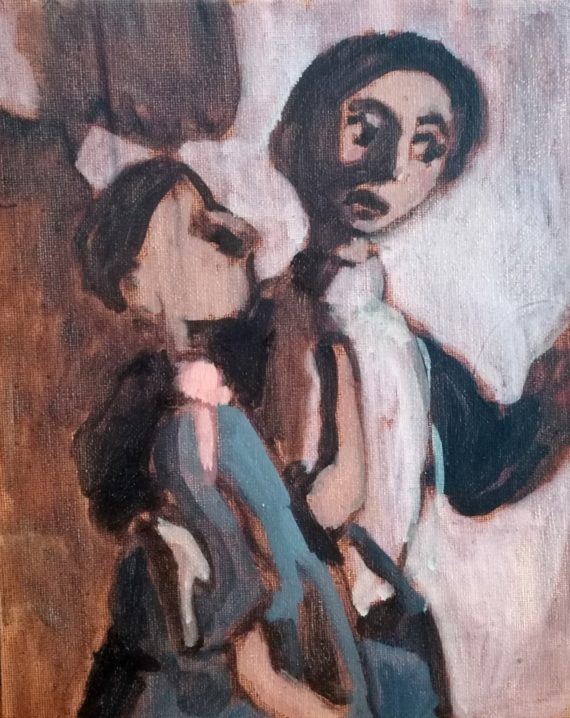