Weeds in the Cracks - a-n The Artists Information Company 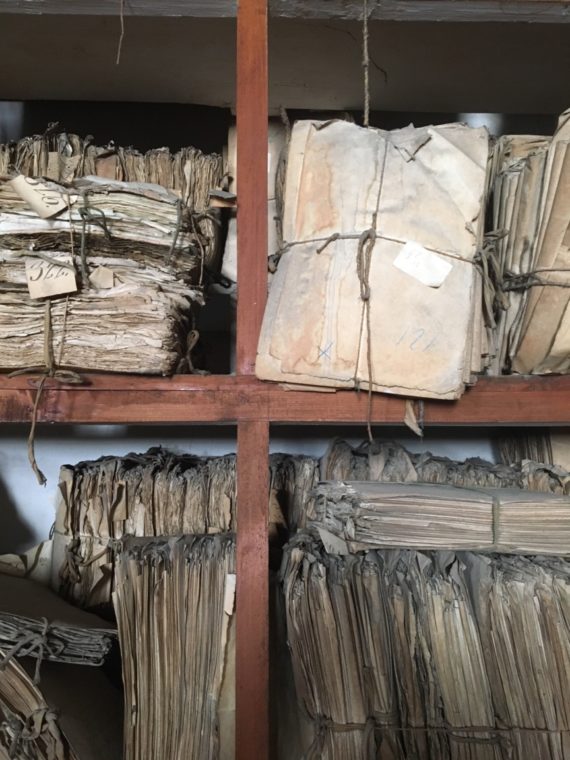 Weeds in the cracks

The planetary Garden is a concept planted in the world by the French philosopher and gardener Gilles Clement. It is this idea that took root with me during my visit to Maifesta12 in Palermo. The idea intertwines a reflection on diversity and stewardship and shapes the approach for this dynamic and purposeful harvest of artwork grown for Manifesta12.

We are pushing too hard at the boundaries of our planetary biosphere. We need to be better gardeners. If Sicily is a melting pot, then Palermo is where the heat intensifies. Manifesta12 celebrates the migratory nature of all living things from plants, cultures, people, even to the restless planetary shifting’s of ocean currents or satellites – as illustrated by the artist Richard Vijgen’s digital moving star map of the anthropocene, ‘Connected by Air’, where satellites and wireless networks drift, digital code starburst and circulate, accompanied by space data noise, projected up into the astronomical space in the ceiling where traditional fixed stars would have been painted gold on blue.

Manifesta12 is framed by the idea of the garden as a planetary index. It is a home-grown Manifesta and Palermo is its muse. Given that Palermo is a city with an incredibly rich layered history both ancient and recent, and a place offering a critically important model of possible futures, there seemed no end to the narratives to excavate and get lost in. The botanical gardens in Palermo are an exquisite and sultry place to start; shaded pathways take you wandering easily into the mind-set of the planetary garden and reflect on the migratory nature of all living things. Specimens from everywhere surprise you and remind you of something you saw somewhere else. The artist Leone Contini’s project ‘Foreign Farmers’ sits on the intersection between creative practice and ethonography and is sited in the botanical garden. Contini is growing courgettes from around the world within a makeshift structure of bamboo sticks and rigging, using the seeds he has collected from displaced farmers, that include Chinese farmers now living in Tuscany, Senegalese growers in Piave, or Bengali growers now living in Palermo. The seed is a migrant, a relational vector, carried as precious cargo to grow into a harvest of home gathered from other soils.

The architectural practice OMA were commission to make a survey of Palermo published as ‘Palermo Atlas’. Though not in any sense a catalogue of Manifesta12 it is an incredibly successful point of access for both the city and Manifesta12. The Atlas visually charts and maps the city as a node of expanded geographic flows of people, finance, living things and people. Palermo is a unique site of cross pollination and model of global conditions and Atlas visually charts the survey of this city much in the way of so many other dynamic and significant publications that have arisen from this conceptually driven seminal architectural practice. An essential indexical, speculative survey of this compelling city generates a map that guides you through places of worship, film, the baroque, the mafia, history, archaeology, where best to get lost, and shows how a city is a palimpsest, overwritten many times. Atlas reminds you that the city itself is a living thing.

Sicily’s geography has meant it is an island that has been occupied by many different civilizations over the centauries and many of these civilizations have gardened the city well, helped irrigate and cross pollinate it. In more recent times Palermo was held to ransom by the mafia, vicious, extractive exploitative gardeners. It’s a place covered in scars, not least in the phenomena of the architectural style of ‘The Incompleto’ – concrete ruinous architectural structures started but never finished, typically standing as evidence of corrupt mafia building practices. The scars are physical, political and emotional, and these scars are still healing in Palermo.

The city’s Mayor is a good gardener. Palermo is in the frontline of the European migrant crisis and its extraordinary mayor, has gone against the direction of most other European leaders and welcomed migration, declaring that anyone who has made their way to Palermo is a citizen of Palermo. Orlando, the mayor of Palermo, was a strong presence at the open events of Manifesta12, embracing the importance of creativity and culture is a tool of social transformation. The opening events included Orlando on stage at Teatro Massimo passionately advocating his position that mobility is a basic human right, and that any human in Palermo is a citizen of Palermo flying in the face of all those trying to close European borders to the current migration crisis and showing warmth and compassion for the desperate individuals that find themselves making the perilous crossing of the Mediterranean. Meanwhile a few miles off the coast of Sicily the ship Aquarius is in trouble, full of over six hundred migrants trying to find safe habour and was being refused entry by the Italian government. In the opening days of Manifesta12 it was sent to Spain.

Orlando was one of several speakers on stage prior to the staging of an abridged version of the opera Bintou, a Sahel opera, directed by Massimo Luconi, with an African cast, a first in an Italian Opera House, that stages the drama of a group of young men and women migrants trying to make a perilous crossing into Europe. Significant art and cultural events are often opened by the city’s mayor but usually these are moments in the proceedings that have to be politely attended and often drag against the excited current and energy released by the event itself. Not in Palermo – the mayor’s words superheated the evening, watering and irrigating this increasingly fertile soil. The opera was the first of many performative elements to Manifesta12, so appropriate in a city that is so full of dramatic staging, procession, puppetry and performance. Pageantry and paganism intersect with Catholic ritual on a daily basis and a visitor to Palermo at any time might get caught up in processional event. The artist Marinella Senatore used this form of social cohesion through the parade by staging her nomadic social theatricals through the streets of the city.

The puppet is another performer familiar on the stages of Palermo, something Masbedo activated in one of the most intriguing city spaces Manifest12 invited you into, somewhere almost impossible to imagine or dream. The State City Archive is a space rarely entered, a vast cavernous space constructed floor to ceiling with shelves stuffed full with ancient paper documents bundled and tied together with string. Dust covers everything, the paper itself is turning to dust, the air is dry and stale, a fossilised record of the city, untouched for so long it is impossible to ever imagining opening its secrets. In this profoundly psychically charged space Masebo has installed a bill board sized video screen that shows a film of a solitary existential puppet, gently and tenderly animated by Mimmo Cuticchio, whose family are the puppet makers.

Performative storytelling takes a staring role in the beautiful film of Jordi Colomer. A cast of fishermen, actors, and audience take a surreal tour on a fishing boat along the coast line beyond Palermo and tell incomplete stories written by the Palermo born writer Roberto Alajmo, on board a fishing boat, about a hotel, a football pitch, a restaurant, sites with dark narratives being told to an audience perched on a structure built into the boat like raked seating that rises and sinks with every wave. The same structure is now fixed and static and available for you to sit on to watch this compelling film. You come out of the old orphanage the film is being presented in and walk along the ignored promenade along the city’s coastline, and step effortlessly into the atmosphere of the film. The sea and troubled waters flood into much of the work here, saturating the city and the artworks.

Other journeys and tours make you engage further with your role as the audience. A short bus trip to the edge of the city to the Zen Garden project is at a location that you wouldn’t normally find yourself; this is a part of Palermo no one would recommend you visiting. It is difficult chaotic depressed place, socially deprived, forgotten, unofficial, squatted blocks of social housing separated by strips of wasteland. Your tour’s focus is surprisingly to see a garden project, an emblem of agency and resistance. A community group have reclaimed a rat infested and litter-strewn wasteland area to build a garden where trees and vegetables are tentatively taking root. Our guide is a young 17 boy from this neighbourhood who tells us about his life and the purpose of this garden; it is social space, a community focus, and most of all it is a promise of the possibility of a better future.

A longer bus ride takes you into the interior of the island to Gibellina, a utopian town with visionary architecture and artworks that was built phoenix like after devastating earthquakes collapsed the original town. You see these ruins before wandering the modern ruins of this sadly a failed experiment, a bleak and virtually empty town, never fully finished, never fully populated as anticipated. A place that forgot to build shade into this baking bowl of central Sicily. Radicalism is part of the town’s history with some remarkable individuals in the previous town’s story including the activist and sociologist Danilo Dolci who lead radical rural movements of the 60’s, and of course the new town’s charismatic mayor, the late Ludovico Corrao, who utilised his dynamic network of artists and architects and invited them to come and dream with him in Gibellina Nuova. This is a complex situation to find yourself in, in a real place, led through the town by town citizens with stories to tell; but something is unsettling, the tour has a puzzle at its heart, a discomfort forces you to take one step back and question where you are, and what this all means. Ultimately, this is an experience that is issuing a profound and important challenge to Manefsta12. The ‘tour’ is a caustic and prickly artwork, an experience choreographed by the artist Christoph Buchel that problematizes the euphoric creative optimism of Manisfta12 and sets up Gibellina as a salutary parallel to events in Palermo.

I want to know that Manifesta12 is part of a re-flowering of the city of Palermo, not just a temporary boost to benefit property developers and the wealthy. I want to believe the radicalism is real and will have impact on how the city’s people see themselves; and that art isn’t there to create a cultural smoke screen of complacency blinding you to what is really happening. I want the world to be able to learn from Palermo’s radical hospitality and understanding of migration as part of the planetary garden, and how Palermo can teach us all how to be better gardeners. There are weeds blossoming in the cracks, with their roots in the very fabric of this incredible city. I for one will be watching and reflecting, to see the flowers pollinated, and seeds pass on the wind and take root elsewhere.