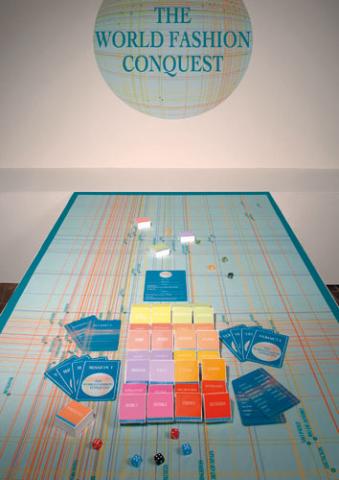 The long running television series ‘Sex and the City' made Sarah Jessica Parker, New York City and sexuality internationally synonymous with fashion brands and was missed by millions of viewers when it finished last year. This iconic programme also became a competitive promotional vehicle for brands who wished to associate themselves with New York City and fashion. Senior Lecturer and artist Wessie Ling offers us an extension of this trend for fashion and the city with her ‘art' installation themes. This is an exploration of how fashion is considered representative of cultural identity underpinned by the establishment of strong fashion city brands. Her work analyses the notion of fashion perceived as a sexy art form because of its intimate relationship with the body. But she also exposes the darker commercial underbelly of the fashion industries which is not always conspicuous to the consumer.

In Game On: The World Fashion Conquest, Ling identifies a recent growing phenomenon of fashion cities from traditional western locations London, Paris, New York and Milan to the expansion of 85 other ‘occidental' cities all competing by hosting fashion-week to enable them to become fashion capital brands in their own right. It is an interactive art installation based on the artist's perception on the motives behind holding fashion week from 85 cities around the world. Inspired by the world domination game, ‘Risk', viewers are invited to play the board game installed on the runway of a catwalk. A map with no territory and boundaries but longitude and latitude lines set out the location for each fashion city mapping out a global network of fashion for the buyers and consumers. The ‘armies' are 85 cubes of compressed T-shirt, an intellectual pun on the basic material and clothing apparel that when ‘fashioned' can culturally and economically represent the fashion cities fortunes. Players sit round a constructed catwalk which reflects the actual world of buyers, journalists and celebrities that help promote fashion week to the world.

Ling's work raises important questions about cultural identity, fashion goods and capital cities. Her work calls for interaction and participation from the spectator through the participation of the board game in order to role play individual fashion cities fight for global domination. Ling's portrayal of ‘fashion and the city' through her art installations crosses cultural boundaries in a playful but considered way.

Game On: The World Fashion Conquest was showed at EXHIBIT (London) from Nov-Dec 2006 and will travel to MAK (Vienna) in June 2007.

Wessie Ling is a practicing London-based visual artist whose work concerns the relation amongst fashion, cities and identities. Dr. Ling also is a Senior Lecturer at the London College of Fashion.

Frances Ross is a Principal Lecturer at the London College of Fashion.

Frances Ross is a Principal Lecturer at the London College of Fashion.