Where is the work? - a-n The Artists Information Company 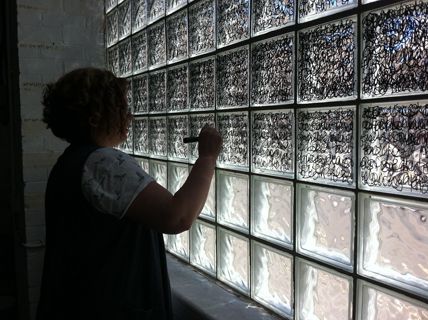 Where is the work? Part One.

It’s a common joke these days to enter a gallery, stoop down over a fire extinguisher and exclaim “is this the art?” Picking up on the humour of the bewildered, this year’s degree show from the MA Fine Art programme at Sheffield Hallam University beats the viewer to the post by titling itself with a question: “Where is the work?”

Eleven artists set themselves the challenge of responding to their final exhibition by exhibiting work that, ultimately, isn’t final at all. Housed across two sites in Sheffield – AGC and S1 basement – are a number of selected works, all of which will grow and change over the course of the show. Degree shows can be an intoxicating mix of personalities, all jostling for their moment in the white-washed partitions of a crowded institution. I remember too well my own uncertainty concerning the proximity of my work to that of a much louder, gregarious neighbour whose fortress of shopping trolleys and rubbish bags appeared to be moving in the direction of my pristine, newly plastered walls. But this showoffers something unusual: a theme. Where is the work? brings together a potentially disparate group of artists and showcases the development of their individual practices as they respond to the space and to one another.

Entering S1 basement, a large warehouse space situated just below S1 Artspace, I am first confronted by a simple floral pattern mapped out in white dust-like powder on the floor. The artist, Sue Taylor, informs me that the material is not dust, or paint, but the left over factory sweepings of the composite material mother of pearl. It’s a subject, and a material, with a social history. The factory was the workplace of Taylor’s mother and the camaraderie between the women of the workplace was a significant contributor to the works conception. The floral pattern moves across the floor in a gesture that reminds me of two dancers waltzing across a ballroom. I can imagine the women sweeping the floor too, in circles and patterns at the end of the day. Factory work has a long and intricate history with Sheffield, my own family tree branched out into the industry of steel for both my grandmothers, but the social bonding they encountered as women remains a mystery to me. I see photos of their friendship groups out dancing or celebrating a birthday, but rarely in the workplace. Taylor’s work hints at the social bonds forged in the workplace, her carefully laid pattern is a nod to the craftsmanship behind production and the mother of pearl dust embraces a traditionally working class heritage. Questions concerning the relationship between an industry and an individual are rife my mind but Taylor’s work has the space, quite literally, to grow into them.

Across the room, lines of writing creep over the windows. Their author Rachel Smith warns me of their latent power to infinitely expand. The marks, containing definitions of definitions, seek to explain away the meaning behind meaning itself and in so doing position a unique mixture of banal words beside wondrous phrases. Punctuated by the semi-colon this work has no foreseeable end. It is process which exemplifies the ambition of the artist: to create ad infinitum. With no full stops the work threatens to outlive its creator, ploughing on relentlessly. In fact the idiom to plough on links Smith’s work to the interests of a text by Jacques Derrida found in his 1967 book ‘Of Grammatology’. Derrida writes on a matter he terms “writing by furrows”, a furrow being the line the ploughman traces with ox and plough. Arriving at the end of each furrow the ploughman does not return to the point of departure, but rather proceeds in an economical fashion by turning ox and plough round to continue in the opposite direction. Derrida notes that such writing, conducted to the turn of the ox (boustrophedon), was later abandoned (by the Greeks for example) in favour of the hand. For, arguably, it is easier to read by furrows than write by them.

The distinction made between reading and writing dictates a large portion of Smith’s own work. Marks made across the windows delineate the deterioration of each furrow as it suffers under the manual labour of the hand, gaining signs of fatigue at each line’s end. But the visual economy of reading is equally overwhelmed. Faced with a sea of language the reader must choose to select portions of the text at random, focusing not on the order of words but on their visual potency as a whole. Respite points within the text usually offered by full stops are entirely lacking. A strange metamorphosis takes place; punctuation leaves the terrain of the written word and finds its home in the author who, only upon ceasing to be, provides the final act of execution that is the full stop.

Returning to the opening question Where is the work? I find myself in a factory once again, a line of constant production before me and yet no final product in sight. Smith’s writing confronts the expectation that an artwork is ever truly complete.

The work of Helen Frank is equally elusive. A ream of A4 paper sits in a stack on the floor. Onto it a projection of a short film is visible. The film shows a hand in possession of a book, on which is an image of a hand in possession of a book . . . and so on. I am instantly transported back to a childhood obsession revolving around Dairylea cheese triangles. No doubt you would be too. Allow me to explain: on the packaging for Dairylea there used to be an image of a cow with a pair of earrings, and the earrings were two circular Dairylea cheese triangle packets on which could be seen an image of a cow with two earrings, which were two circular Dairylea cheese triangle packets. . . you get the picture. This upset me greatly. To what end did these Dairylea cows duplicate? How many infinitely smaller cows could be found in this image? Frank’s work found in me the same strange anxiety of a self-replicating image. Projected onto a stack of paper which itself has the potential to be removed one sheet at a time and then, perhaps, replaced again, I find myself trapped in the cyclical nature of what it is to make work. Perhaps this work also hints at a question regarding that which we assume to be replaceable. Paper is after all an organic resource, the availability of which we take for granted. Just like the Dairylea conundrum, Frank’s work produces something simultaneously nonsensical and profound. It has an unreachability that echoes the very essence of art.

It is perhaps inevitable that an exhibition united by the uncertainty of its own visibility (where is the work?) should produce such themes as infinity, changeability and repetition. That it should challenge the relationship between the act of production and what is produced. After all, if the point is not to locate the art then we are left with an obvious alternative: to locate the artist. I am reminded of a photograph I came to possess in 2008. It is a photograph (or so I’m told) of Samuel Beckett. He is sitting in a living room in front of a television. The light from the T.V illuminates his face and reflects off his glasses. When I look at the photograph I am tricked by its subject. I find myself gazing not at Beckett for information about his character but at the T.V for a sign of his reflection in it. Similarly I soon discover that the art in this show is so unresolved it appears to bounce off the eyes of someone else. Interrogating the work I seek the reflection if its maker in the hope that I might make one step closer to discovering where the work is.

There are numerous references to the association forged between art and writing, something that occupies the concerns of many contemporary artists. In a world where image and text are simultaneous on the screens of our lives, flattened to the same resolution at times, it is common to seek one for the explanation of the other. Old, wooden desks are a relatively common feature in Where is the work? Two of them sit vaguely opposite one another and, belonging to different artists, apprehend in me the tension I have yet to resolve regarding contemporary art exhibitions. Somewhere between a misplaced sense of nostalgia for the writer in a pre-laptop age and a visual metaphor for the academic I am lured into a false sense of security. On one desk a handful of barely visible photocopied medical notes nestle under a blank sheet of paper. Language becomes a watermark against the backdrop of the image.

This show is a complex mix of uncertainty, discovery and potentiality. Many of the questions asked are familiar to me, they have much in common with my own research and background as a graduate of the MFA programme Art Writing at Goldsmiths; they quite comfortably situate themselves in the realm of art academia. But the show pre-empts any apprehension by asking the very question we might ask of it: Where is the work? We are freed, therefore, from the burden of this worry and left to enjoy the work that is undeniably evident before us.

Where is the work runs from Saturday 8th June to Saturday 15th June. At noon every day the artists will between them host a different happening/event, highlighting the changing nature of their work. Entry is free and the show is open 10:00am – 4:00pm, Monday to Saturday.

Helen Cocker is an artist and writer based in Yorkshire, interested in the relationships that are formed between art and language.Â  She also writes for Exposed: http://www.exposedmagazine.co.uk/culture/culture-cat/ Personal blog: http://handhand.info