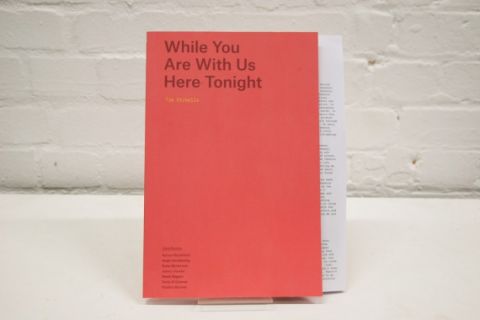 For those familiar with Tim Etchells’ genre spanning and, to some extent, genre defying work, the unconventional format of his most recent publication will come as no surprise. This does not, however, diminish any delight on encountering the strange flesh of While You Are With Us Here Tonight, as its pages attempt to stitch together an energetic corpus that is otherwise known as Etchells’ artistic practise.

Stemming from his LADA, Tate and ACE funded Thinker in Residence Award, the thing (more easily described as an ‘art object’ than it is a ‘book’) is a stapled together mismatched document, where the central text – the opening monologue from Forced Entertainment’s First Night – appears on three-quarter width pages that intercut, or ‘bookmark’, full pages of footnotes from a number of contributors. These footnotes form a Chinese box of discursive commentary surrounding not just the genesis of the original speech itself, but of its place in personal histories, theory and performance practise more broadly. In comprising the majority text, the annotations are moved from a place of marginal relevance and placed centre page, accomplishing an excavation that attempts to expose the core of Etchells’ work and legacy.

If you’re hoping for a memoir, I’m glad to say that you’ll be disappointed. While You Are With Us Here Tonight is not a retrospective; it’s the guts of a body of work pulled out by a cacophony of voices both past and present. An autopsy by number; eight to be exact:

Reading the thing is to enter delirium; eyes spiral the pages from text on the left, to footnote on the right, to text on the right, to image on the left and over and over – a pattern of comprehension Cy Twombly’s coiling stylus would endorse. The dismantling of theatrical apparatus, a pastime of which Etchells is fond, begins instantaneously and disorder is introduced layer by layer through a series of interruptions and mindful diversions. Setting the tone for subversion is a well placed anecdote in footnote #3, where an American military theatre participant is quoted: ‘[W]hen you come to the theatre you get a chance to relax a little bit more and everybody works as a team for the same goal. It’s the same with the military. We all work towards a certain value, towards a certain point’. Not so Tonight, as eight overlapping perspectives serve to complicate the notion of a ‘universal’ theatre and make it a foreign land without conclusion.

Throughout While You Are With Us Here Tonight, the then audience/now reader, is only told what not to think; ‘Try not to think about coughs and coughing people and sharing space with strangers and sharing the bed with people you hardly know’, which conversely forces us to think of all the coughing and all the strangers. Similarly, Steve Rogers’ (17 Aug 1955 – 10 Dec 1988) posthumous footnotes, as he is written back into life by Etchells’, raises a succession of ghostly figures through denial; ‘Do not think any more about Ron Vawter (9 Dec 1948 – 16 Apr 1994)’, which ensures that playfully, seriously, sadly and joyfully, we do.

The nature of Tonight’s exquisite corpse is summed up beautifully by Terry O’Connor in her last footnote on the subject of ‘footnotes’:

‘Perhaps it speaks to something deep in the experience of being an audience member; about the process of attaching your own thoughts to the moment, in the moment. Or perhaps it speaks of the way we sometimes revisit the past, thinking ourselves back through time, dragging the words of the present with us to annotate, comment or question. Back then now here remembered, with us.’