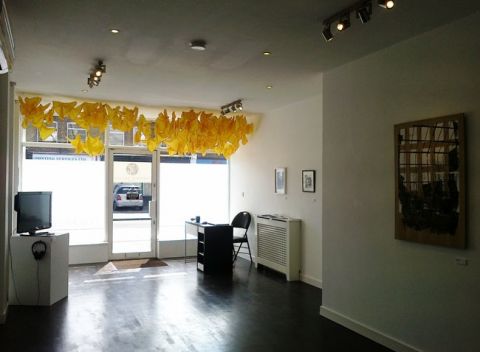 Works by Rei Matsushima, Margaret Moore, Zoe-Lee Skelton and Asako Taki are presented as a group show, Windmill. Show literature describes the windmill gaining power from the wind on its wings, using that power to make energy in relationship with the land. A question of environmental impact is introduced.

The windmill is a signifier for the artistic individual, operating as a collective in the landscape, affected by environment, with difference and distance between them. With four windmills in this landscape, I am asked to question whether each windmill has spirit and moves of their own accord, to harmonise as an artistic collective.

My first circuit of the works indicates a negative. Moving from piece to piece, medium and style shift significantly, between artists and within artistic offerings. These windmills appear to assert themselves as distinct monumental objects in a stilted landscape.

Rei Matsushima’s installation piece Token, spans the ceiling above the doorway and window space. Intriguing series of homely yellow dust cloths caught hanging at random in a bower of chicken wire like so many plastic bags in trees. ‘Embroidery on duster’, states the listing, but on first exposure I don’t see the embroidery and pass on. I move though 180 degrees of print based work. By turns it is abstract, then figurative, then urban landscape, shifting via photographic etching, to line, to aquatint tone, to mixed media. Stuttering subject and stylistic shifts from piece to piece.

At halfway rotation through gallery I, the work of Zoe-Lee Skelton is a jolt of acidic acrylics and surprising material experimentation. Pieces of Eight collages cigarette packets into a honeycomb pattern with miniature gilded bees occupying a tea stained ground. The Futility of Cassandra’s Prophecies confronts casual binning of used cosmetic facial wipes by employing them as a textile patchwork with stitching and transferred magazine imagery, to aggressive and grubby effect. Struggling to Breathe and Sin Factory draw a tortured figure, a skeletal or gas-masked visage at the centre of an assault by aggressors numerous: crows, wasps, spider, assault by compact mirrors, the sands of Time.

Sever Ties, in gallery II, breaks from drawing and collage to c-type digital print with an image of a dislocated car windscreen and an unoccupied chair. Who sits and reflects in this chair?

A full rotation brings me to Still Sounds by Margaret Moore, a ten minute looped video piece set in a crypt gallery, a timeless anywhere space of dimly lit brick tunnels. The artist’s interest in the environment is in the tension between the power and fragility of nature, a fragility associated with human memory and family history. An atmospheric piece, it uses archive faces from another era printed on voile tissue-like hanging panels with layers of sound and song refrain. A labyrinth space that demands to be experienced first hand, walked through. I tune in alongside the hum of private viewers at the edge of my headphones.

Widening my circuit into the linking corridor space, textile materiality continues in Silk Sails, an installation of four silk scarves hung like inverted parachutes from a mesh of net, in series. Each carries colour and imagery from nature; a tree branch, flora, moving as I pass.

I have cycled once through each windmill by turn and once through the landscape of four as a whole. I begin to turn in my mind and harmonise the honeycomb of the bees with the honey yellow of the dusters, the net and hexagonal shapes cast by the chicken wire on the walls of the gallery space. I feel the presence of the bees and wasps and the hum of the hive alongside the sound and sensory labyrinth of the crypt chambers. I understand the four of the silk scarves, as windless sails with potential to move in the breeze. I have a sense of environmental pollutants choking, and interplay of the work with light. However, I need a second circuit and insight from the ‘windmills’ themselves to understand their landscape more fully, to gauge harmony.

I tune into Zoe-Lee Skelton to hear the myth of Apollo spitting into the mouth of the visionary Cassandra rendering her unable to speak. This is a story of false promise and frustration. Here the spit is carried to and fro by harshly stitched wasps between gagged mouths across a waste of grubby wipes. The contemporary protest is anguish at the false promise of art education leading to employment. The anxious pitch of the marks and colour in the work communicate a gritty cycle of cigarettes, tea and daily assaults, and the internal battle to produce despite all, as the artists’ lot.

Rei Matsushima explains the abstract image within Dream Slides as two horizontally juxtaposed etchings developed from photographs of abandoned areas of Middlesex campus at closure. The title hints at a room of unclaimed projector slides and to the dream fading.

The missing embroidery of Token is explained to my demanding Western eyes as intentionally invisible yellow stitching of the names of friends as invisible thread in Japanese characters. Each duster is thoughtfully juxtaposed within an imagined network with a hesitancy to force or assert either the possession of that friendship or push friendships together.

Untitled is worked from a photograph of a past painting studio in Prague which develops in charcoal line and masking tape the grid work of the window to emphasise the light outside. Ark is a dense black aquatint sky holding the bulk of a church building, somehow ship like, recently landed perhaps, imminently about to set sail. References to productive environments now passed.

In conclusion after two rotations (with guidance) through the landscape of Windmill I begin to understand the subtle deal these windmills have struck in accepting that work situated alongside each other will sometimes turn in synchronicity, and sometimes it won’t, and that is fine. Environmentally, they are co-located, but each turns in their own artistic space, with loss or anger and acceptance, no longer powered by a shared hive or artistic place of learning. Each must generate their own wind and move of their own accord.

Windmill as a collective is an example of disparate winds sourcing energy to beget wind, generating and sharing momentum. In this context the work of Asako Taki makes absolute sense. In Walthamstow Story the artist responds simply and physically to the environment in which she finds herself by photographing it, in the moment, subsequently applying industry to workshop and drive her own narrative. Four artists, windmills or worker bees networking to survive and thrive, producing individual and collective energy in a tough landscape. Visual harmony between Silk Sails and Token is at best with daylight moving through and breeze from the gallery door or a passer by. 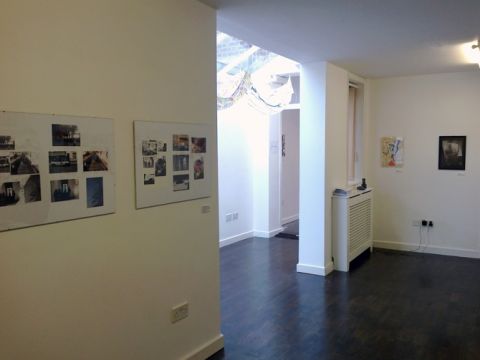