You and Me - a-n The Artists Information Company 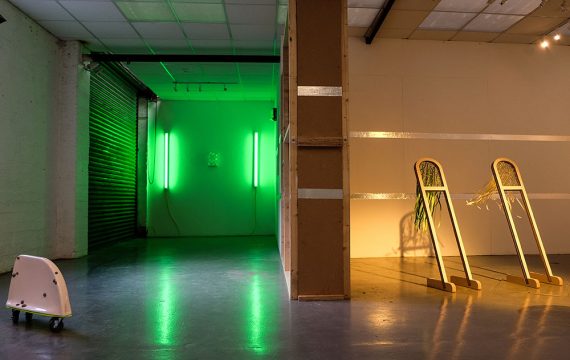 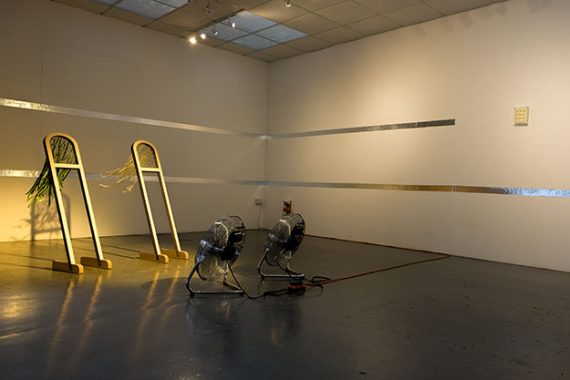 Will Hughes’ You and Me is a playlist. It is a mood, a moment in time, and a state of mind. The songs on the playlist lend their lyrics to the work in the form of titles, and together they feed back into the loop of meanings generated by this collection of new multi-media work.

Parallel racing stripes trace the outline of the gallery and pockets of green and yellow light bathe the works in signifiers of sci-fi movies and references to queer culture. As I approach a green neon haze at the end of a short corridor, ‘In the land of gods and monsters, I was an angel, looking to get fucked hard’ sticks all fourteen of its tongues out at me and I respond in kind. I’m trying to mimic the distorted shapes of these protrusions which turn out to be approximations of human tongues, rather than casts of the real thing.

Popular culture knows the line, ‘Try to kill it all away, But I remember everything’ from an emotionally fraught cover version by a dying Johnny Cash, but to some the original version by Nine Inch Nails resonates deeper still. The song remarks on the despair felt by one whose mental state is no longer under their own control. The work that takes this line as its title comprises an
18 x 14 x 4cm layered acrylic sculpture, in which central layers of foam are locked in a permanent state of compression by the outer casing of clear Perspex. Through small apertures in the Perspex the foam bulges, temptingly.

‘3AM, Mustang speedin’, two lovers headed for a dead end, too fast, hold tight, he laughs’ consists of two tall, narrow, curved-topped frames. At the top of each frame is a mesh from which streamers hang. Side by side they lean back at 20 degrees, in front of a pair of large aluminium fans which sit on the floor. The fans, which are activated by gallery visitors’ movement, set the streamers blowing in the breeze. Bathed in yellow light, the piece screams of riding off into the sunset, Thelma and Louise style, although the piece is in fact inspired by the Pussy Wagon scene from the Tarantino movie, Kill Bill. This is the centrepiece of You and Me, and it knows it.

Only when Hughes calls on the readymade does their work fall short of its own high standards. For ‘Well, somebody told me you had a boyfriend, who looked like a girlfriend, that I had in February of last year’ Hughes has taken a ceramic urinal divider and placed it on its back, mimicking a shark fin, on shopping trolley wheels. The piece is well executed, if less accessible than the other work here, each of which has its rationale laid out in the exhibition text. It is telling that the text for this piece is almost as long as the other three combined.

Hughes’ practice is a filter, through which they process both the world around them and their own experience of life as a queer artist. It’s easy to lose yourself in this small but meticulously pitched collection of highly emotive work. I’m a sucker for this whole scene – outsiders and underdogs do it for me every time – and Hughes’ work, which comes from a position outside of society’s many binary distinctions, runs the gamut from gender non-conformity to which ‘type’ of artist you are.

Hughes says, “My work gives you a big kiss on the lips and wants you to stick around for more.” I stuck around, and it told me that although the future might not be all sunshine and roses, what’s important is that you’re here with me, and together we’re gonna be alright, you’ll see.

With a two-year MA in Newcastle starting next month, I expect Hughes’ practice to move quite quickly, and as I think again of those parallel racing lines that tie the room together at the Roper Gallery I am reminded that for You and Me, Hughes has assumed the roles of artist, writer, and curator and has, on the whole, combined them to create a conceptually mature exhibition that is a feast for the eyes and ears. It would be no bad thing, though, if during the course of their MA, their work were to lose a little of its transparency and gain a hint of mystery.