I’ll close this blog with a short reflection and shuffle off. Overall, the key themes for me were independence but also a willingness and ability to adapt to a changing landscape, and the importance of group activity in facilitating discussions […]

A short and sweet post to wrap up some of the other bits and bobs which didn’t get a full fat write up. Mentioning them here in case it’s useful to anyone visiting Buda. Chimera Projects, a commercial gallery supporting mid-career […]

The best part of the trip was the intensity of traveling as part of a group and the discussions that happened around the planned delegation meetings and visits. Each of the delegation had a very particular project or interest that […]

On Wednesday March 21st a dinner was held at the apartment with the stone steps. The guests at this event were the poet and artist,  Marton Koppany and his wife Gyongyi. During the dinner an idea emerged from the conversation around the table. The […]

Artist-led or independent spaces engaging directly through programming, protest or boycott of the state was a key element of the trip. Aurora and OFF-Biennale were the most progressive in this approach and other members of the delegation have written about our […]

First stop from the train was a trip out of town to Art Quarter Budapest (AQB). This trip was a direct follow on from the Transylvanian Hungarian Exchange: re-appraising folk and the contemporary talk held at Castlefield Gallery in 2017, which […]

In lieu of a more imaginative way to blog, and because I have a very bad memory, I’ll write about what happened, and what I thought, across an 8 day Budapest Delegation Trip in chronological order. Hopefully this will develop […] 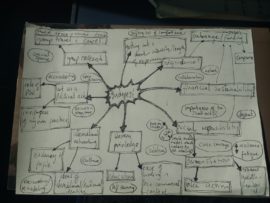