Our final bursary funded meet up took Dean and myself back to London to the rare book archives of the Wellcome Library. I had requested in advance some of their 17th century alchemical manuscripts and these had been bought up […]

The summer has been a period settling deeper into the Jungian and alchemical teachings that have resulted from our bursary funded “night shaking” project. Dean and myself have continued in our personal readings and researching of the subject matter but have […]

Dean Melbourne post On 2oth June we had the opportunity to deliver a talk/workshop at the Reading Room of the  Wellcome Collection’s   as part of their Open platform series. It was a great opportunity to share our research learning to […]

Dean and I met in Bruton for a two day alchemical workshop with Jungian analyst Catherine Bygott. ⁣ ⁣Our sessions with Catherine seem to have been building to this point and it was a highly charged, emotional and influential time. As […]

This is the first contribution to this blog by Dean Melbourne. As the project is collaborative it seemed to make sense that one blog would better reflect the tone of experiences as opposed to the repetition of two very similar […]

We had our second meeting with Jungian analyst Catherine Bygott in Somerset on Friday. As well as discussions she led us in a physical exercise to connect us to our unconscious self. It was a challenging activity but really interesting […]

Dean Melbourne and I travelled to Bruton in Somerset for our first exploratory meeting with Jungian psychoanalyst Catherine Bygott. Catherine has lectured and led numerous seminars and workshops in the UK and Ireland over the past twenty-five years on Jung’s […] 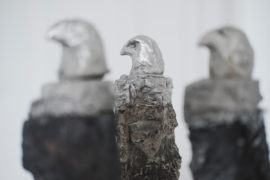 Diary of a collaborative research project in the areas of Jungian psychology, alchemy and mythology

Work developed as a result of my growing interest in an underlying connectedness, holding an affinity with Huxley’s view of ancient Chinese landscapes as metaphors for the ‘Antipodes of the mind.’  Research and influences included: Expressionism, colour theory, Jung, Richard Wilhelm, […]