One of the interviews that was part of my New York Art Adventure…  ‘NO ONE CAN MAKE A JAPANESE TEA CEREMONY BOWL..THEY GROW FROM THE HANDS OF THE MASTER AND THE NEEDS OF THE CLAY…THE MASTER ALLOWS’ Ray Robinson   History […]

Stephen Romano (extreme left) with Joe Coleman and friends at the opening reception of ‘Opus Hypnagogia’ So what makes art dealers select the pieces that they do? Commercial instinct? A certain aesthetic? In many spheres, art is simply, all about […]

Mission Statement Outside The College of Architecture and Design, Newark.

I’m leaving New York tonight to return to England and today isn’t quite the flurry of meet ups and activities that I had planned. The Chelsea Manhattan bombing last night combined with general New Yorkers busy-ness meant that several of […]

Anyone with the drive, focus, energy and passion to make it in New York, deserves kudos. If they keep a sense of of morality, self and spirit intact, all the more power to them. This is a driven city, and […]

A continuation from last night’s ‘taster’ blog about my talk at The Museum of Morbid Anatomy in Brooklyn. I’ve had a rest, eaten plenty of carbs to ground me, and can step away from the post performance high to write […]

Well it’s late at night, New York time and I’m floating down to earth after a fabulous evening at ‘The Museum of Morbid Anatomy’ where I just gave a presentation. I’ve attached a few taster images above, and an outline […]

‘Visual AIDS is a haven for me and my contemporaries, nurturing, honouring, protecting and utilizing our work. Its intergenerational approach to activism through visual art gives my 28 years of mercurial survival a historical significence, and contemporary vitality.’  Eric Rhein, […]

A long and in some ways disillusioning day, that will take a little processing time to fully put into perspective. I had some time to spare before my meeting with Nelson Santos, Executive Director of Visual AIDS, so I went […]

I woke up as always to sirens (is it just the area I’m staying in, or are there constant sirens in New York?) and decided that as this is my last relatively appointment free day, I would simply walk and […]

My final few days of random art explorations before I get thrown into a maelstrom of meeting, greeting, schmoozing and networking. The mood around the World Trade Centre today, on the eve of the anniversary of 9-11, was more sombre […]

Kicked off my morning by walking past three giant inflatable rats that were adopted as a patron of protesting metro workers, because ‘rats were also survivors’. There was an obvious prevalent tension and more of a heavily armed police and anti terrorist […]

My daily blog hasn’t slipped, it’s time that has slid backwards. I arrived in New York late last night and I’ve been on the most massive sensory overload and adrenaline buzz since then. It’s hot, the area I’m staying in […]

24 hour countdown… For those who are interested and either in the area, or know someone that is, attached is a link with details of my talk at Brooklyn’s ‘Museum of Morbid Anatomy’, next week. http://www.brownpapertickets.com/event/2569438 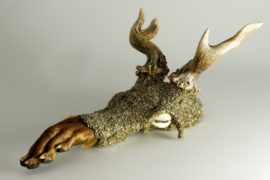 Art Adventures and Explorations on an a-n Travel Bursary