Alien Skills (collaborative drawing, Rhubaba Committee)   Rhubaba first approached me in June 2017 with the question of whether I would be interested in working with them on some research in relation to funding received from A-N. The project was […]

Emma Hedditch led two sessions at Rhubaba which introduced the values, beliefs and principles that are the basis for co-operative practice and the potential for their application within artistic practice and organisation.   www.rhubaba.org/emma-hedditch   7 feet of particpants, mugs, […]

Louise (The International Institute for Important Items) tells a story about a neolithic site in France – perhaps Brittany – where the stones, similar to these, were used to build a road. Natassa and Tim listen.   map reading 54.859239°N […]

family Siobhan and Elspeth listen to Ruth from Eastside Projects discuss the structure of the organisation (we don’t have hugely clearly defined roles) With semi-skimmed milk, hit biscuits, small succulent plant,teaspoons, pantone notebook and posters to learn from and think […] 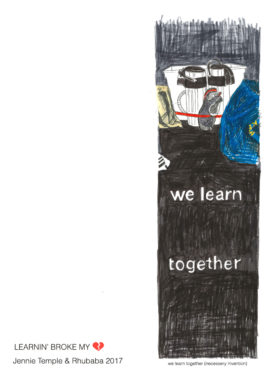 Learnin’ broke my 💔 is an ongoing research project concerned with experimental and self organised educational practices. The research is a multifarious activity held in common by the individuals who, collectively, constitute Rhubaba as a space. They have and are […]