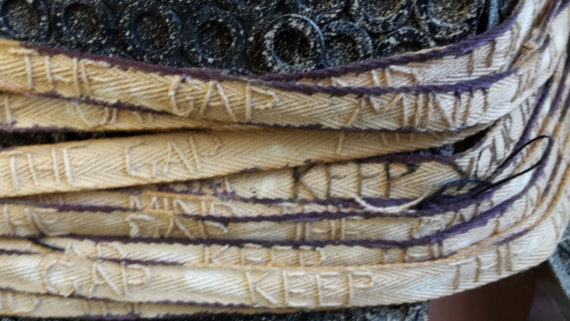 I have made a collection of 3D figures that explore and question some of the many roles women fulfil throughout our lives. Working with fabric and stitches I have sought to construct life-size figures that retain the vulnerability of the female body but which maintain a powerful presence.
While making this work I have been influenced by artists such as Louise Bourgeois, Kiki Smith, Marlene Dumas, Jacob Epstein, Sarah Lucas, Paula Rego and Eva Hesse.
By gathering them together in 4 groups I intend to subvert the accepted cultural narrative of a woman as “naturally” inhabiting a single continuous persona that is what it is the be Female and thus pose questions about societies expectations.
For instance the woman/man single parent; the howling 3 headed birth figure is she angry or in pain; the house wife wearing a pinny of nails [for various reasons in a patriarchy] and a gas mask [to try and cut out the fumes of corruption] and 2 ways her daughters could evolve; the disappearing older woman [4 hanging shapes] who is largely ignored as no longer of use; the huge Gaia figure lamenting/furious at the death of the poem wrapped woman who has waited too long to become herself, [plus possibly the embroidered torso of historic abuse and the slag writhing under tabloid labelling] .
The relationships between the figures in each group, and between the groups conveys power and vulnerability of the female situation without clarifying too overtly
Thus the groups perhaps need to be in one large space, with sufficient distance between each group so that they can have their own energy, a space where the viewer can become aware of the presence of more than one perspective and gain an impression of the diversity required from women. EG half the sculpture room with the 10’ divider walls to enclose the space
There is a resemblance to shops dummies so they could be displayed in a shop window in town to interesting effect.
They could be displayed on each landing of the Art School stairs so the effect is accumulative.
They could also be exhibited in Room One [café] each group in a right angle of the room dividers.
0 Comments