Personal but not private paintings - a-n The Artists Information Company 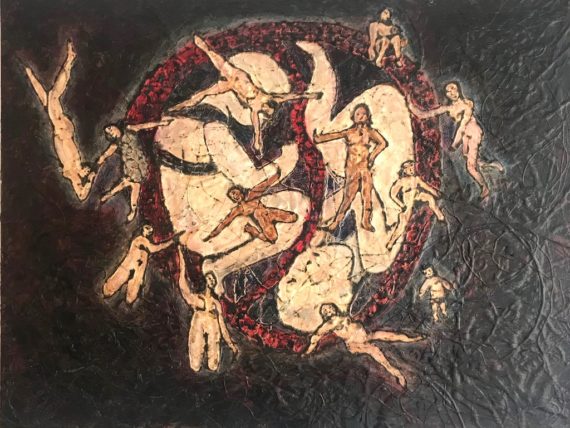 Since 2005 Delpha has developed her own unique and resonant painting practice. Paintings have been shown and sold in public and private galleries around the UK with the latest work at Clifton Art Gallery, Bristol, and the Edge of Dark show at Tremenheere Gallery, Penzance. Recent Domestopia paintings have been short-listed for Confinement Chronicles and the Mother Art Prize. Her recent sculpture residency and installation Small Promethean Acts was especially commissioned for Artcore Gallery, Derby, 2019, working with communities to develop ideas about care and the domestic. Delpha has always painted but opted for a degree in History at London University (BA, 1985), returning to study painting for a Fine Art BA in Birmingham in 1997. Moving away from painting to an interdisciplinary feminist practice that dealt with mental health issues, motherhood and the personal as political she completed her MA in Visual Performance at Dartington College in 2003. Her inter-disciplinary approach, embraced performance, live art, curation, installation and sound. She has shown work regularly around the UK and Europe since the late 1990s, with work commissioned for the Tate St Ives, Miss –Readings (2007), Double Void, Newlyn Art Gallery, (2001), Place Settings, Ca’Zanardi, Venice (2016) and most recently Double Burden with desperateartwives at the Leyden Gallery, London (2017). Film work historically was often based on the maternal body and performance was shown around UK and Europe, including On the Margin (2004) and Life Sentences, (2013). New films made in lockdown 2020 link to Theatre of the Self, a performance and publication about rewriting our stories for good mental health. Delpha is a member of the Newlyn Society of Artists, and co-founder of a number of art collectives including Art Surgery, and Salon de Textes. As co-director of Art Surgery (1998-2008) she curated Arts Council funded site-specific performance programmes; A Sense of Place (1998), TRACT (2006) as well as other collaborations with Newlyn Art Gallery and off-site programmes such as Videoteque at Ten Gallery, St Ives (2002). Her current painting practice develops concepts from her multi-faceted life and practice to engender empathy for women, mothers and carers.