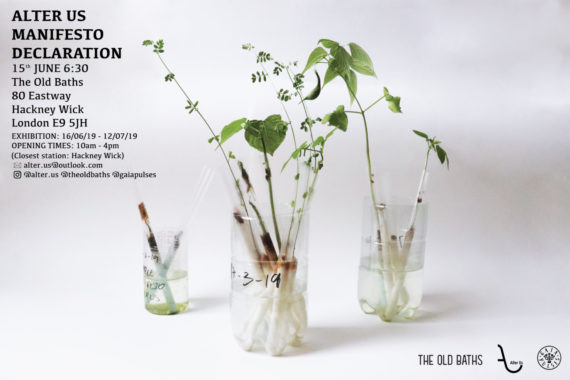 The Old Baths Café presents Alter Us, an emerging, London-based artist collective, and the first declaration of their manifesto. The exhibition includes works by members of the collective, ranging from collages to bio-art installations, which deal with issues surrounding the ecological crisis and human relations in the twenty-first century. The manifesto declaration and a performance will take place during the private view at The Old Baths Café on 15th June, and the exhibition will be open to the public until 12th July. A panel discussion on the 19th of June at 19hrs will accompany the show.

Tere Chad, the curator and founder of the group, says: “In the public installation manifesto at The Old Baths Café, London-based artists come together as the collective Alter Us to present a dynamic, creative response to current narrow perspectives on politics, life and the possible futures facing many humans today.”

The members of the collective come from diverse international backgrounds and have formed the group on the premise of contemporary ecological thinking. Rather than the traditional display of a collection of statements, Alter Us have shifted the manifesto formula to a series of open questions which aims to empower the viewer, instead of lecturing them, as an active participant in a state of climate deterioration emergency.

As the collective of artists comments: “what happens when we let (our) nature take its course? Are we actively hastening our annihilation or embracing an evolution, are we running from our last sunset or towards a new sunrise?”

Alter Us is an emergent, London-based, multidisciplinary collective that attempts to question and offer solutions regarding our contemporary context. The collective’s concerns relate to challenges presented by the Anthropocene, including sustainability, (dis)connection, individualism, capitalism and inequality, and the relationship between nature and new technologies.

About The Old Baths Café

Comments by Yolanda Antonopolou at the venue: “We offer a familiar creative space. We serve organic food. Beans are lentils are an essential element of our menu, as they are one of the most sustainable crops, rich in proteins.”