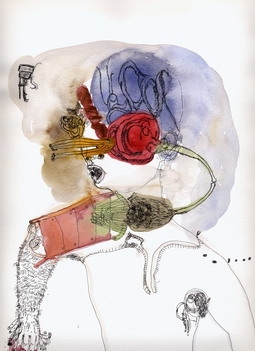 Anna Barratt studied in Southampton and Wimbledon before returning to her hometown of Swansea to start a family. Her drawings and paintings were featured strongly in the 2006 Eisteddfod. Naively executed and delicately drawn, her work unearths ambiguous images from the subconscious with undercurrents of conflict and nightmares. Greatly influenced by her travels in Mexico, Turkey and Istanbul, her work has been described as ‘hotwired to the unconscious'. Her pieces have a ‘lo-fi' feel which gives them an emotional rawness, but which maintains an ambiguity that leaves interpretation with the viewer.