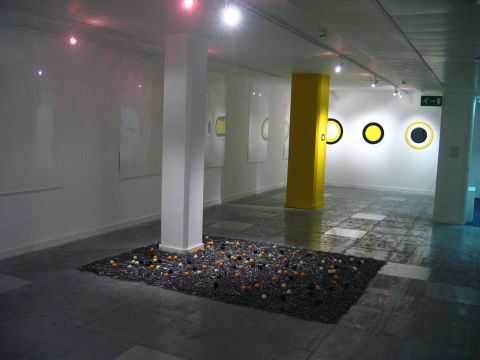 The Banquet is a meeting point for people predicated with a complicated set of social relationships. As it is often surmised, “bad news goes better with food”, inviting people to a banquet allows social transaction beyond the proclaimed reason behind the banquet. Even though banquets are often celebratory feasts, they highlight social exclusion and the disquiet social gatherings represent. Consequently, a banquet allows for particular congress between differing and opposing positions. Codes of propriety that surround banquets: from dress to deportment; decorum and use of language; instill an understanding of the managed engagement between the individuals at the meal. Banquet a new installation by Dr. Raimi Gbadamosi will traverse both galleries, encouraging involvement from the works’ viewers in creating new understandings. Gbadamosi is a British conceptual artist and writer. His work addresses themes of identity and art theory, often using his trademark motif of yellow, white and black. He received his Doctorate in Fine Art from the Slade School of Fine Art, is a member of the Interdisciplinary Research Group Afroeuropeans, University of Leon, Spain, and the ‘Black Body’ group, Goldsmiths College, London. He is on the editorial board of Third Text. http://www.the-republic.net