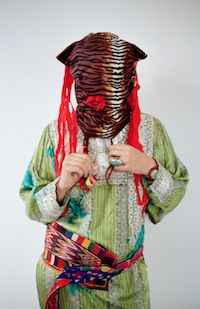 Darby and La Bas have worked together to produce a series of performative images which encompass elements of Kabuki, Lindsey Kemp and punk, defiantly play out a masquerading, androgynous costuming; a psychological exploration of the physical exploitation of the artist as object. ‘I used to be called Kate Bushand witch at school,’ writes Delaine. ‘Lately I have been thinking about Polysterene, X-Ray Spex, listening to John Peel, going to jumble sales, being a member of CND, and Dikiomengro Tan at Chapter where I first did the Kabuki make-up after being taught by a friend from West Sussex College of Design who was part of the Kemp Company. But going to Poland recently was huge in my re-discovering of why I had gone to art school in the first place – my access to this world that I wanted to be part of.’ Rather than asking the audience ‘what kind of gypsy queen would you like me to be today?’ in this collaboration with Darby, Le Bas re-positions and reclaims her right to be seen first and foremost as an artist. Delaine Le Bas and Tara Darby Portrait of the Artist is shown in tandem with To Gypsyland at I98 Contemporary Arts & Learning, London, Friday 20 June – Saturday 16 August 2014