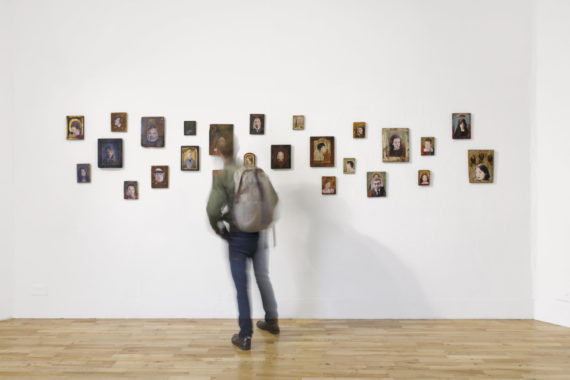 By literally painting celebrity icons on top of badly damaged 18th and 19th-century religious icons of saints (purchased on e-bay), British artist Robert Priseman examines the contemporary obsession with celebrity and how it has mimicked or even replaced religious faith. Selecting celebrities whose lives ended prematurely in self-destructive or otherwise traumatic ways, the Fame series repurposes the religious definition of martyrdom and redefines it for the sake of celebrity lifestyle and status.

The paintings first went on public display at Art Exchange, UK in November 2013, then WhiteBox AC New York City, in a show curated by Tony Guerrero in January 2014 and in ‘Re-cyling Religion’ at the Dukely Center, Miami in 2016, where Rhizome wrote “FAME both literalizes and deconstructs the notion that celebrity has replaced religion, drawing parallels between the immediacy of tabloid culture in the internet age”

This new exhibition celebrates one of the UAMA’s most recent acquisitions—71 of the more than 100 works in the Fame series which are on display and are now part of the UAMA permanent collection, while the balance of the project is held in the collections of Honolulu Museum of Art, MOMA Wales, Mabee-Gerrer Museum of Art, Wayne State University Art Collection, Michigan, University of Michigan Museum of Art, The Allen Memorial Art Museum, Michigan and The Dennos Museum Center, Michigan who have 15 of the works.

Read more about the project here