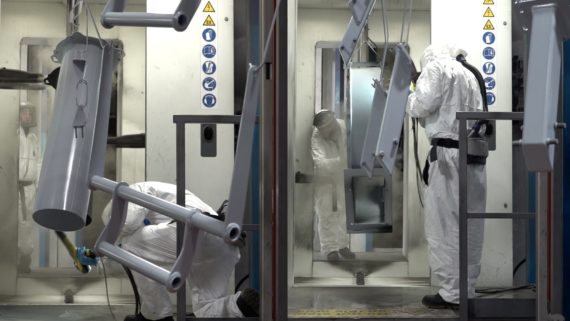 We are delighted to present Formation Level, a solo exhibition of new and recent films by Amanda Loomes.

A former civil engineer, artist/film-maker Amanda brings her technical expertise to an exploration of the materials, companies and individuals that make and maintain the roads we all use.

“People at work have always preoccupied me. I am particularly moved by work that is repeated or undone and the effort of people whose work goes unnoticed. In my practice I am drawn to record their labour as I try to capture the frailty and resilience of human endeavour”.

The exhibition will also comprise material from Amanda’s own archive of her time as a civil engineer, including photographs, diagrams and other ephemera.

The artist completed an MA in Fine Art Painting at the Royal College of Art (2006), and BA Fine Art Painting at University of the Arts, London (2004). She has exhibited widely, including Oriel Davies Open (2018), Supporting Material, UCA Canterbury (2017), Jerwood Open Forest, Jerwood Space (2014) and has undertaken permanent commissions with Metal, Southend (2017), and Trust New Art, National Trust Lyme (2016). She has been a member of The London Group of artists since (2008). She has previously exhibited at Aspex as part of EMERGENCY(2011) and South Central (2014). The exhibition also features Relict Material a film installation co-commissioned by Photoworks and HOUSE in 2015 and her recent film Whole made in the sand quarries of the Surrey Hills, commissioned as part of Surrey Unearthed (2018).

Aspex will be also hosting a seminar with the artist on Saturday 2 March, 14.00hrs. Gareth Bell-Jones, Curator and Director of Flat Time House and Dr Erika Balsom, Senior Lecturer in Film Studies at Kings College London will be joining the panel. This is a free event but booking is essential.