I am looking - a-n The Artists Information Company 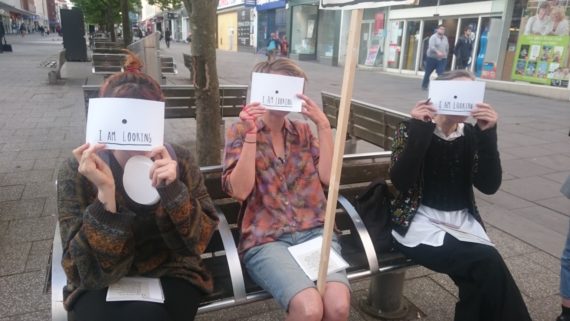 GHT: a reincarnation brings eight Southampton based artists together to explore the past and present of God’s House Tower and its future as an arts and heritage venue within Southampton.

This exhibition, I am looking, will present the artists work in progress and lines of enquiry from the residency so far. The exhibition will take place in God’s House Tower and three satellite venues, Mettricks Cafes across Southampton City Centre.

Through a series of workshops the artists playfully exchanged ideas, investigating Gods House Tower using their own and each other’s practices as starting points. The two exhibitions offer a glimpse into this on going process, alongside offering opportunities for you to take part.

Knit the Walls, 22 October, 12-4pm
A long-term participatory project, lead by artist, Sarah Filmer, which offers the people of Southampton the opportunity to contribute to a community art work for future exhibition in god’s house tower, when it reopens as an arts and heritage venue.

700 Women, 29 October, from 10am
An event addressing the question ‘where is her story?’ 700 Women will process through Gods House Tower as a symbolic gesture, balancing the gendered history of the building as it stands, embodying an intention to move forward in arts and heritage with feminist intent as this space is reincarnated as a new venue. There will be live activities on the day, recording the event and participants.

These events are part of the BAS8 Fringe Programme, which is taking place across Southampton from October 2016 – January 2017 in association with The British Art Show 8.

GHT – a reincarnation is generously supported by Arts Council England, Southampton Solent University and ‘a space’ arts. The exhibition ‘I am looking’ has been made possible with support from Culture Southampton. We would also like to acknowledge the support of The Heritage Lottery Fund who is generously funding the redevelopment of God’s House Tower through ‘a space’ arts.

I am a Freelance Visual Arts Producer working across the visual art sector since 2005. I support, develop and deliver unique visual art projects. I work from a base in Southampton, but undertake projects locally, nationally and internationally.