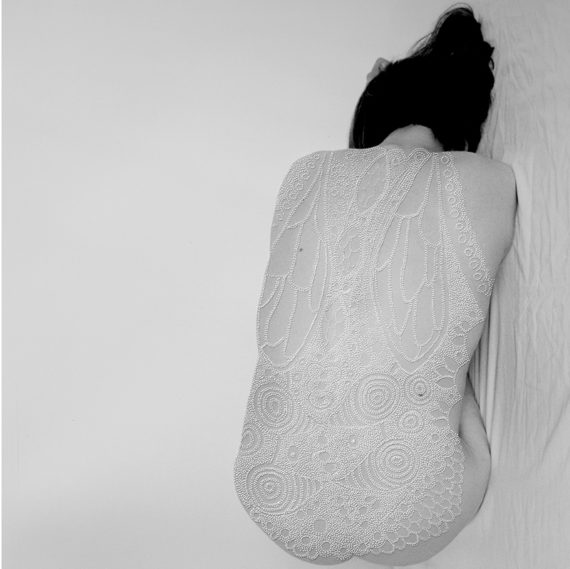 We are delighted to announce that the Vittoria Street Gallery will be hosting a solo exhibition of work by international artist, Jessa Fairbrother. Armour studies (regarding skin) will be on show at the Vittoria Street gallery opening on Monday 16th January until Friday 17th February 2017.

As a photographic artist using textile techniques, Jessa’s work crosses over disciplinary boundaries, and she is interested to explore the body as both vessel and surface.  Employing self-portraiture, the artist’s body hovers on the edge of being the material and subject as she explores the connection between her form and the exterior world.  This solo exhibition brings together a collection of works where she performs within the image and upon it, cladding her physical identity in armour to protect it from her own disappointments and the viewer’s scrutiny.

Describing the photographic image as provocation, she interrupts the surface of photographs using sewing needles to puncture hand-made prints, either embroidering or creating textural adornments suggestive of lace and engraved metal.  In perforating this exterior layer, she invites the viewer to think of the skin not only as an embodiment of selfhood but as a body that both touches and is touched. Her concerns originate in attempts to identify feelings beyond the embodied form, confronting gestures of fallibility and the body’s relentless failures.

Photography, performance and a needle are central to Jessa’s practice. She uses the body-as-site and is concerned with making explicit the moment when performed gestures and the gaze of the viewer collide.  She searches for communal meanings defined and given shape through the presence of a figure and makes long-term work about how this writes itself upon the body.  The purpose of thread, mark-making and stitch are central, physically piercing and extending the image-object beyond a single moment of time and space. She frequently appears in her own images, then pierces and embroiders to employ process as mindful action, making textural surfaces that literally and metaphorically puncture the skin of the photograph.