Laura White: If I Had a Monkey I Wouldn't Need a TV - a-n The Artists Information Company 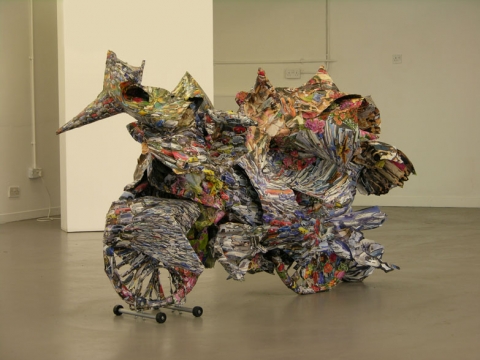 Castlefield Gallery is pleased to present If I Had a Monkey I Wouldn't Need a TV, a solo show of new work by London based artist Laura White. Working with video and found objects her work addresses the convergence of the manmade and the natural world using both static and moving images sampled from the Internet, billboard posters and TV documentaries. They are consequently shattered or distorted by direct confrontation with objects and other matter in the space, encouraging the viewer to reflect and explore the artifice within the imagery. Through distorting and concealing imagery, her sculptures are suggestive of the way in which humankind manipulates the environment for its own needs, whether that is through the containment of the natural world to provide us with entertainment, or the mis-representation of both humans and animals for economic gain. White is interested in the idea of a haptic experience in relation to imagery, where one has a physical relationship to an image and encounters them through a sculptural language. By representing images in this way the viewer confronts the image both physically and spatially, inviting them to dissolve their subjectivity in close and bodily contact with the image.