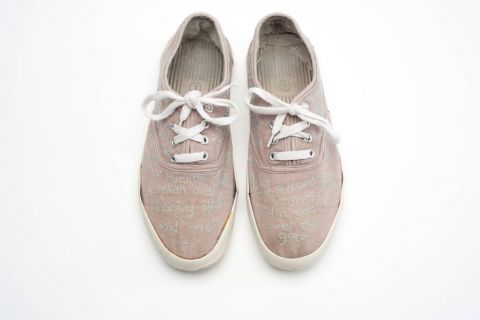 Jeanette Orrell has been slowly developing a body of work over the past six years to create intricate and sensitive sculpture that combines personal objects with the intrinsically personal. Some of the work uses hair, some of which was exhibited at the National Eisteddfod and in Strand at Oriel Wrecsam. She has also been stitching objects which were shown at tactileBosch. Jeanette is also included in the recently published book Making and Drawing by Kyra Cane.

Jeanette studied at Camberwell School of Art and Crafts from 1982-1985. After graduating she spent some time traveling before returning to the UK to undertake a residency, then married and had two children. Jeanette worked from home whilst bringing up children and doing various workshops. She moved to Wales in 2002 when drawing became her main practice. In 2006 Jeanette received funding from the Arts Council of Wales and in 2013 she received a large production grant from Arts Council of Wales to continue work on a new body of work.