NO EDEN: Protest, and the Art of Protest - a-n The Artists Information Company 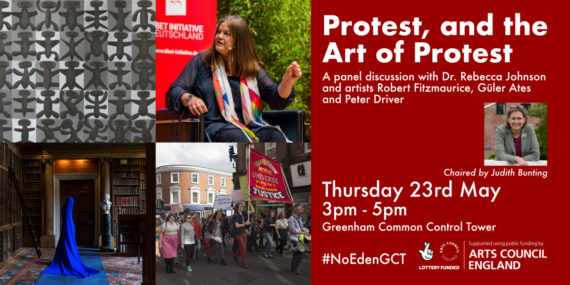 Protest, and the Art of Protest

This panel discussion is part of the exhibition NO EDEN by the Reading-based artist Robert Fitzmaurice which is at Greenham Control Tower until 29th May.

Protest can take many forms. It is often encountered in public spaces and collective actions such as marches, rallies and graffiti, and of course at the peace camps of Greenham. Yet protest may also appear in other forms that are less immediate and interventionist such as texts, lectures and works of art. This discussion considers these different perspectives and what connections exist between making art and protesting.

Dr Rebecca Johnson is the founding Co-Chair of the International Campaign to Abolish Nuclear Weapons (ICAN), 2017 Nobel Laureate, and long-time feminist peace campaigner. She lived at the Greenham Women’s Peace Camp from 1982-87, and will share stories and songs from that time.

Peter Driver is a multi-disciplinary artist, collaborator and teacher. He uses drawing, performative action, woodcut printmaking, and banner-making to think about art, environment, society and the common good. He favours the collaborative principle that the viewer plays a part in creating a work’s meaning.

Robert Fitzmaurice makes art about the human condition, rites of passage and identity. For NO EDEN he presents images that not only reflect upon gender roles highlighted by the history of the peace camps but also the problematic language used by men of power who since antiquity associate violence and destruction with virility.

Judith Bunting is a television producer, specialising in science, technology and children’s education. She was also the Parliamentary Candidate for the Liberal Democrats Party for Newbury for the 2017 UK General Election.

Each panelist will talk in turn about their own practice and opinions, followed by further group discussion.

There will be two sessions with a break inbetween for refreshments. The afternoon will close with panellists taking questions from the audience.