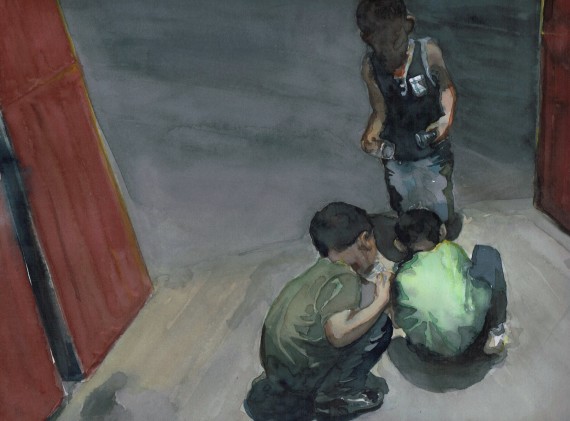 A series of delicate works on paper by 17 living artists from China. These give a snapshot of the current work and concerns for those living through one of the greatest social upheavals in modern times. There is so much here, a rich mixture of contemporary and traditional imagery often merged in very individual ways but all carrying a sense of change and longing. This encounter has come about from an exhibition of contemporary drawings by British based artist staged at the Xi’an Academy of Fine Arts in December 2015. Whilst there, Robert Priseman and Marco Cali met local artists, visiting many in their studios. The energy of the economic boom in China is overwhelming. Buildings are being put up at a phenomenal rate and although still centrally governed, the media and social spaces of these cities are a theatre of modern restlessness tearing away from traditional mores. Social conditions hold a strong influence over the way artists in China choose to approach their work.

Jiao Ye was one of eight children and his father owned a major share in Xi’an’s city cinema. When the Cultural Revolution (1966-76) swept across China, his father’s business was taken from them. In this period artists were expected to produce works sympathetic to the communist cause and adhere strictly to a Social Realist style of painting. However, as Jiao Ye grew in confidence, he realised he wanted to reject these teachings and evolve a style which embraced the free flowing forms of abstract expressionist painting. The gestural nature of his mark making embraced individuality and referenced the traditional brush work of Chinese calligraphy as well as resonating strongly with American painters such as Cy Twombly, Jean-Paul Riopelle, Sam Francis and Helen Frankenthaler. By depicting the forgottn landscapes of his native city, Wang Fenshua has managed to fuse ideas around the rapid social expansion his generation has experienced with historical continuity. By combining an idisyncratic technique and the abstract beauty of natural forms, Jiao Ye aimed to create paintings which celebrate fertility, freedom and non-conformity.

Wang Fenghua, born during the heart of the cultural revolution in 1971 paints in a photorealist style notable for its poetic portrayal of the lost, neglected and abandoned places of his native Xi’an. The people-less environments he depicts are deeply moving and have a strong emotional resonance with the work of western painters like Casper David Friedrich and Atkinson Grimshaw combined with the modern sensibilities of Richard Estes, John Salt and George Shaw.

He Yating has a fascination with western art and media, in particular a love of films and the glamour of the movie stars they showcase. Born in 1980, she is of the One-Child generation of ‘only’ children. This policy was phased out in 2015 and for those of this age that are also parents like He Yating, there are the twin pressures of raising their own children and simultaneously looking after ageing parents as it the tradition in China. Her work tends towards an over-abundance, an exaggeration of something that, in the end, is itself ephemeral.

Open to the public and admission is free.