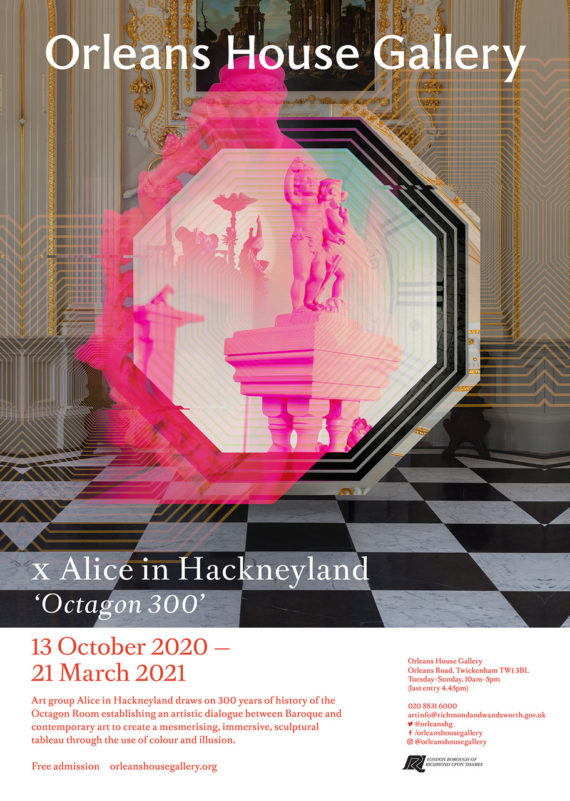 Octagon 300 was curated by Jonathan Roson and created by members of art group Alice in Hackneyland. The exhibition features two installations The Fluorescent Banquet, 2020 and Play with Baroque, 2020. Both artworks pay homage to the history of Octagon Room by alluding to playful illusions of the era in a contemporary 21st century context.

The Octagon Room was built in 1720 as an annex to the main Palladian style mansion completed in 1710. In sharp contrast to the sober and controlled appearances of the main house, the Octagon room is a Baroque architectural structure, exuberant and joyful, fit for wining and dining royalty. Secretary Johnson, the owner of Orleans House at the time, became close to the new Hanoverian dynasty and hoped to appeal to their architectural tastes by constructing a distinctly Baroque extension. He commissioned the construction to a Scotsman James Gibbs (1682 – 1754), one of the few architects in Britain who travelled to Rome and received first hand instruction from a prominent Baroque master, Carlo Fontanta (1638 -1714), himself a student of Gian Lorenzo Bernini (1598 – 1680). The Octagon Room remains one of the most brilliant examples of Gibbs’s more eclectic Italian Baroque style buildings in Britain and a unique hidden gem of London.

Baroque art movement originated in Italy as counter-response to the religious Reformation movements of the 16th century. Throughout the 17th and early 18th centuries, Baroque expanded past the religious divisions of the time and reached Protestant countries as far North as Britain. Baroque’s drama and passion captivated the hearts and souls, but its more playful side, the dynamism and the exuberance, questioned ideas, boundaries and perception of reality.

The use of perspective, quadratura, and stucco in architecture and the adaptation of trompe l’oeil techniques for painting represent some of the most vivid and captivating effects of Baroque art. On a grander scale these illusionary techniques allowed artists to create sense of altered reality, a reality that was greater than life itself. Something that was far away appeared to be near, flat surfaces displayed three-dimensional objects, the church roofs bounded by the ceilings appeared as infinite as the heavenly skies above. In smaller and more intimate works, trompe l’oeil illusions emitted a sense of wonder, at times playfully deceiving and playing pranks on its viewers.